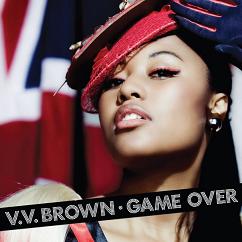 It’s great to see this week that popstar of AMAZING proportions VV Brown criticised Radio 1 for not play listing her songs. Too right. Let’s not stop at Radio 1, let’s extend that to most commercial radio stations too, who still insist on playing a song by The Script for the hundred millionth time!

VV then went on to suggest that the station had become a follower rather than a leader citing the jumping on the La Roux bandwagon. After all, Radio 1 only added ‘In For The Kill’ to it’s schedules AFTER the single had charted and achieved success.

VV was included in the BBC poll of ones to watch in 2009, how do they expect her to fulfil this promise without supporting her? What was the point BBC?

As mentioned, commercial radio is just as guilty, not scheduling decent pop British music like Girls Can’t Catch, VV Brown, and Little Boots to an extent, favouring Lady GaGa for the millionth time. Where is the variety?

Anyway, despite my feelings toward radio and how it is scheduled, VV has made a cracking video for her new single ‘Game Over’ due out on 21st September and here it is! It’s a STOMPER of a track and one of many many AWESOME moments from her debut album ‘Travelling Like The Light’. Enjoy…