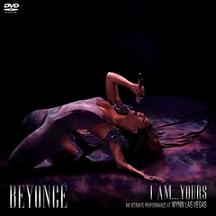 Beyoncé is currently in the UK for the second leg of the ‘I Am… Tour’… so how about some Beyoncé news? Since, it’s first release nearly a year ago… Sony BMG has been kind enough to cash-in and issues FOUR different versions of Beyoncé’s fantastic album ‘I Am… Sasha Fierce’, as well as a dance remix compilation ‘Above And Beyoncé’… NOW, if that wasn’t enough to keep fans satisfied, a live album and DVD package is set to be released!

‘I Am… Yours: An Intimate Performance at Wynn Las Vegas’ is a 2CD and DVD digi-pack, of a special one off intimate show that Beyoncé performed in Las Vegas in August 2009. It is billed as an unplugged/acoustic event where Beyoncé shows off her softer side. It’s due for a UK release on 7th December and in other countries around the same time. You can click here to preview a video of the show on the US Amazon store. Now… where’s the piggy bank!?