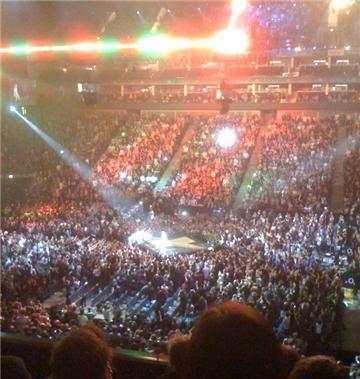 Beyoncé played her second of three dates at The O2 on Sunday night as part of her ‘I Am…’ world tour, and it was a spectacle with big league guests making an appearance either on stage or in the audience.

The show has been on the road almost non-stop since March, but you certainly couldn’t tell… Beyoncé delivered, backed by her all-female band and dancers and a remarkable video screen projection! Beyoncé opened with strains of ‘Deja Vu’ before unleashing ‘Crazy In Love’ with a guest appearance from Jay-Z, the audience we were wild! For the rest of the show, Beyoncé was pitch and note perfect throughout for nearly two hours and it was a million times more confident and enjoyable than her first solo tour in 2003.

Highlight of the whole concert came early on in the form of, ‘Smash Into You’, which was magnificent. The set-list covered all bases from Destiny’s Child to the current album ‘I Am… Sasha Fierce’. Several songs were injected with a verse or chorus of a hit song by another artist for example ‘If I Were A Boy’ contained parts of ‘You Oughta Know’ by Alanis Morissette.

Kanye West wearing a Queen Elizabeth I t-shirt made a surprise appearance to recreate the remix version of ‘Ego’, he was met with a standing ovation once people actually realised that it was really him! An acrobatic sky walk across the arena was a great touch and a creative way to get to the smaller stage in the arena.

Overall, it was a fantastic concert but the set list needed a bit of pruning to make the really good stuff shine, only using ‘Sweet Dreams’ as a video interlude was disappointing. The Michael Jackson tribute was unnecessary as was singing Happy Birthday to one member of the audience at the end of the concert. Minor details really in what was a cracking show.