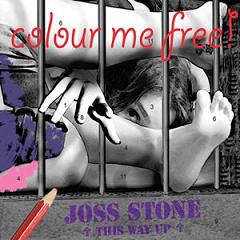 Joss Stone’s fourth album ‘Colour Me Free!’ is already a Top 10 album in America and it’s finally released in the UK this week, after many delays due to a public battle with EMI. Is it any good and will Great Britain embrace it?

Die-hard fans will notice from looking at the tracklisting that many of the songs have already been heard or used on other projects… so for these fans, it’s not so much a new album but a chance to own these songs on one CD. Five tracks on the album feature collaborations from the likes of Nas, Ben’s Brother and Raphael Saadiq. Joss largely works with writers and producers who helped create the very successful ‘Mind, Body, Soul’ album.

The lead single ‘Free Me’ is a funky number. ‘Could Have Been You’ is terrific, from its twinkling piano intro to its soulful passionate vocal, it is quickly followed by the smashing ‘Parallel Lines’, which is a pacy upbeat funky number featuring the talents of Jeff Beck & Sheila E.

‘Governmentalist’ features Nas and is a brilliant track – Joss’ vocals sound sublime, a cover of ‘You Got The Love’ by Candi Staton is included and its a great choice, the track is returned to its original soulful gospel tinged arrangement and it works. ‘Stalemate’ with Ben’s Brother is as splendid as ever. ‘Mr Wankerman’ is Joss done wrong – it’s raw and gritty.

Some of the tracks aren’t brilliant, for instance ‘I Believe It To My Soul’ is a great Ray Charles track but sounds out of place. ‘Big Ol Game’ is good, it features Raphael Saadiq who produced the ‘Introducing Joss Stone’ album, but in fact the song was originally a Japanese bonus track on that album, so as a result, it doesn’t seem to fit on this album.

Overall though, it is a great album, it does lack some of the freshness of ‘Introducing Joss Stone’, (which, happens to be an AMAZING album) BUT is very worth giving a try as it’s a real mixture of sounds and Joss embraces them all… there’s certainly something for everyone here!