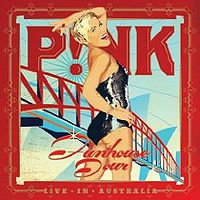 Pink happens to be one of THE most AMAZING artists ever and it happens to be a Pink overload this week here in the UK and it’s mightily exciting! Pink is currently stunning audiences in the UK playing dates on the ‘Funhouse Tour’. This week also sees the release of the incredibly beautiful new single ‘I Don’t Believe You’, which is available from iTunes by clicking here. The single comes with a live version of ‘I Don’t Believe You’.

Also this week, Pink releases her album ‘Funhouse’, this time it’s called ‘Funhouse – The Tour Edition’ which, features a new brilliant upbeat rocker called ‘Push You Away’, as well as ‘This Is How It Goes Down’ which, was previously an iTunes bonus track. The album comes with a DVD which includes all the videos for the singles from this album and some live performances!

Also, a DVD, ‘Funhouse Tour – Live In Australia’ is in stores this week, it’s a bloody AMAZING DVD, the show is sensational and captures the spirit of the show wonderfully… it’s the next best thing if you haven’t witnessed it in person yet! Here is a taster of what you’re in for…

If that wasn’t enough, Pink has announced that she will be playing stadium shows here in the UK in June 2010. Tickets go on sale on MONDAY 9th NOVEMBER at 10am… the dates are:

Finally, if you needed perusading as to how incredibly awesome and amazing Pink is, click here to read a brilliant MTV article about how Pink is the world’s most underrated superstar!