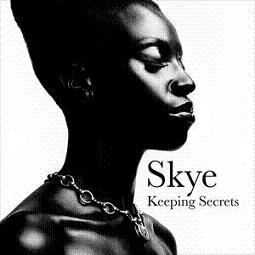 Skye is probably most well known for fronting Morcheeba before leaving in 2003. Then, in 2006 Skye released her brilliant debut solo album called ‘Mind How You Go’. Last week, the follow-up second album entitled ‘Keeping Secrets’ was released here in the UK.

It’s another fantastically good album, give it a whirl! It opens with the magnificent ‘I Believe’, which, builds to create a lush extravaganza, the same can be said for many of the album tracks including the glorious ‘Exhale’. ‘Boo Hoo’ is a great song that advises not to bottle things up and contains reference to the album title ‘Keeping Secrets’.

‘Not Broken’ and ‘Monsters Demons’ are both hauntingly beautiful – the production is grand. ‘The Shape I’m In’ and ‘Almost Killed Me’ are perfectly upbeat and instantly catchy.

‘Keeping Secrets’ is a lot darker and intense than ‘Mind How You Go’. With each listen, each song grows in beauty and you find something new. It’s a wonderful album in every sense – production, lyrics and vocals all fit perfectly. You can hear some of these songs on Skye’s official MySpace profile by clicking here.