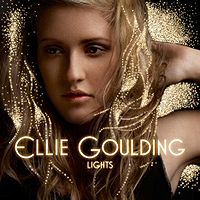 BRIT award Critics’ Choice and BBC Sound Of 2010 poll winner Ellie Goulding releases her hugely anticipated debut album ‘Lights’ this week. But does it meet with the massive expectations and does it justify the prestigious awards and recognition it has so far attracted?

‘Lights’ is a 10 track album lasting just 36minutes! Opening track ‘Guns And Horses’ is confirmed as the next single – it’s a perfectly good choice too… from it’s broken sounding introduction and verses to it’s full gianantic chorus. However, it’s probably just us BUT Ellie’s pronunication of ‘horses’ is sung in a very Dick Van Dyke kind of way and comes out as ‘horsizz’ – although, the word only appears once so we should probably stop being ridiculous and get over it!

Current single ‘Starry Eyed’ is as super and magical as it was the first time you heard it and deserves it’s new entry number 4 chart position this week. ‘This Love (Will Be Your Downfall)’ is a sparkling and memorable. ‘Under The Sheets’ is the biggest highlight of the entire album – everything about is glorious. Both, ‘The Writer’ and ‘Everytime You Go’ have great choruses. The album version of the FrankMusik produced ‘Wish I Stayed’ has a been updated and sounds current and fits with the rest of the album. ‘Salt Skin’ has a grand downbeat groove, which closes the album beautifully.

‘Lights’ is a magnificent debut album – it has just enough variety to maintain interest throughout, it’s cleverley created and well produced – it also happens to justify all of the praise garnered so far. Good job all round!