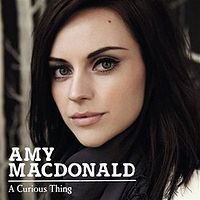 It’s been two-and-a-half years (but only seems like yesterday) since Amy MacDonald’s all-conquering debut album ‘This Is The Life’ was released! It’s great to see the ‘reluctant’ pop star back but is album number 2 any good?

It all kicks off with the magnificent lead single ‘Don’t Tell Me That It’s Over’ which, is a loud, frantic track and a confident statement and signals that she (Amy) is back. The second track ‘Spark’ is well written – “don’t worry I’m okay now” is sung with genuine conviction. ‘I Got No Roots’ is a highlight and begins as a reflective and simple acoustic number before building to a fuller production – lyrics include reference to the album title “this life I lead, it’s a curious thing” and MacDonald’s accent can be heard strongly when she sings ‘looking’.

Amy restates the unimportance of ‘fame’ and the ridiculousness of ‘celebrity’ within her own life on several tracks on the album. During ‘An Ordinary Life’ she sings…  “i don’t care about the spotlight” whilst pondering “where will the music take me” – it’s frank, honest and refreshing to hear. Similar themes are employed on ‘My Only One’ where she sings about the fickle nature of fame “There was time when the whole world was looking at you… They changed their minds from day to night.” Whilst, on ‘This Pretty Face’ she states the importance of values over looks “what matters to me is a strong belief… it’s about what’s inside”.

The latter stages of the album take a different stance. Both, ‘Troubled Soul’ and ‘My Time Will Come’ are gorgeous uplifting songs – they’re like an audio hug and the final track ‘What Happiness Means To Me’ is a glorious piano led belter.

Overall, it’s a brilliant album, a grreat return. The voice is as distinctive as ever voice. The album cover displays a more confident and comfortable Amy, which most importantly is heard in the lyrics, the instrumentation and production of the album. ‘A Curious Thing’ is a must!