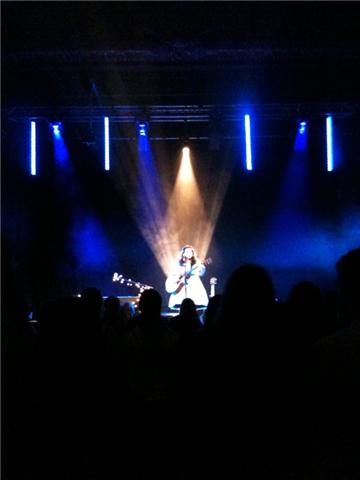 This is not a conventional review, it’s more of a ‘what happened on the opening night of Nerina Pallot’s spring tour’ type thing…it’s doubtful we’d be able to do Nerina justice anyway!

It’s funny how a series of unconnected events can lead you to a specific time and place. Largely due to the Volcanic ash cloud that cancelled our British Airways flights and disrupted our trip to Rome for this week, we found ourselves in Bath, which seems the obvious place for all things Roman after all! It also happened by chance and coincidence to be the place that the extraordinary Nerina Pallot began her latest UK tour – it must’ve been the Roman gods working hard to fix holiday disappointments or something!

Excited by the unexpected opportunity to see Nerina live, we arrived at the venue which is very nice. The merchandise stall was a hubbub of activity selling the new EP ‘Skeleton Key’ along with the ‘Buckminster Fuller’ EP and ‘Junebug’ EP and ‘Acoustic Sessions’ EP (all £5) as well as some vinyl, CD singles, the three albums, a mug, bag and some t-shirts! It was manned by the very familiar voice behind Nerina’s uStream ‘gigs’ – her husband Andy Chatterley, who was a very nice man and needn’t be camera shy during those webcasts at all!

The stage was dressed with a keyboard, acoustic guitar and electric guitar and some fancy lights on the mic stand. Shortly after 8.30 Nerina graced the stage, wearing a lovely blue frock – opening with a stunningly beautiful rendition of ‘It Starts’ followed by a thunderous version of ‘Idaho’. Nerina’s voice was crystal clear and pitch perfect throughout and, demonstrated so magnificently during acoustic numbers like ‘The Long Tall Grass Of Summer’, ‘Mr King’ and ‘Human’.

Setlist: A mixture of tracks from the three studio albums, tracks from the EP’s, a couple of new songs and a cover version (not accurate but the setlist includes: ‘It Starts’, ‘Idaho’, ‘The Long Tall Grass Of Summer’, ‘Damascus’, ‘Human’, ‘Everybody’s Gone To War’, ‘When Did I Become Such A Bitch’, ‘The Right Side’, ‘Mr King’, ‘Real Late Starter’, ‘Blood Is Blood’, ‘Will You Still Love Me’, ‘Skeletons’, ‘Wolf & I’, ‘My Last Tango’, ‘Sophia’. She moved from piano to acoustic or electric guitars – the arrangements were faithful to the original versions.

Cover Version: Nerina performed her version of ‘Skeletons’ which is a Rickie Lee Jones song and the inspiration for the new ‘Skeleton Key’ EP. She stated how she hoped to write a song a tenth as good as it, which made us a little sad at the realisation that Nerina doesn’t know how good she actually is!

New Songs: Nerina performed ‘Wolf & I’ also from the new EP and previewed during her last uStream session as well as ‘Will You Still Love Me’ which was a gorgeous, tender and fragile piano led beauty.

The set came full circle thematically with ‘My Last Tango’, which lyrically seemed like the perfect accompaniment to the opener ‘It Starts’. The encore consisted solely of the mighty ‘Sophia’ (at just after 10.15p.m).

The lighting was fantastic, it was a great addition to the music and very well conceived and designed. Bravo!

Pre-amble or audience interactions: we’ve seen Nerina countless times now and one of the BEST things about a Nerina Pallot concert is her discussions with the audience. She is such a funny, highly intelligent and interesting lady. Topics from the night ranged from:

*First time playing in Bath despite loving the city and wanting to live there in her “dotage” with talks of outliving her husband and owning an expensive house.

*Solo gigs without her band and not knowing what to talk about.

*Being crap at Maths but being good at Physics.

*Gig disappointment story of an *unnamed* (Martha Wainwright if you saw the uStream session) artist who did mostly new songs and cover versions.

*Reference to being part of the earth and oneness with nature (including volcano links) before signing ‘Human’.

As ever with Nerina, it was a stunning, everything she does is delicious. I URGE you to see her play live, Nerina performs with such warmth, honesty and passion – it’s such an AMAZING and incredible experience.

‘Skeleton Key’ EP – It’s housed in a card sleeve with a lovely picture of Nerina on the back wearing a very nice blue hat! The EP track titles are ‘printed’ on the CD and not on the sleeve AND the track titles do not come up when the disc is inserted into iTunes, so you’ll have to type them in yourself.

1. ‘Wolf & I’ – the studio version has a much fuller sound, it has lush and rather grand instrumentation throughout, it’s quite a dark track, less immediate than some on the EP but still beautiful.
2. ‘And So It Should’ – this begins quietly before it builds and adds an array of instruments; best of all hand claps, before it falls down again, the lyrics are often delicate and poignant – “our hearts cry out for more” is heartbreaking.
3. ‘Break Up At The Disco’ – the most poppy and immediate track on the EP, it’s got a really rich sound, lots of layers, strings and brass instruments. It’s our favourite at this particular time.
4. ‘Is This A Low’ – 5minutes 56seconds in length, once again, it’s a bluesy, really heavy, darkly produced song with many twists, Nerina’s vocal sounds like an earthy growl and it reminded us in some ways of ‘Sense Of Another’.
5. ‘Skeletons’ – a cover version of a Rickie Lee Jones song taken from her album ‘Pirates’. During the show, Nerina described her love of the song that became the inspiration behind the whole EP in terms of it being tightly linked together thematically and sonically. She also spoke of how ‘Skeletons’ is the track that she referenced in the opening line of ‘Wolf & I’… “I dream of a song from 1981”. We’d not heard the original before BUT since listening to both, we prefer Nerina’s vocal and delivery of what is a rather beautiful story.