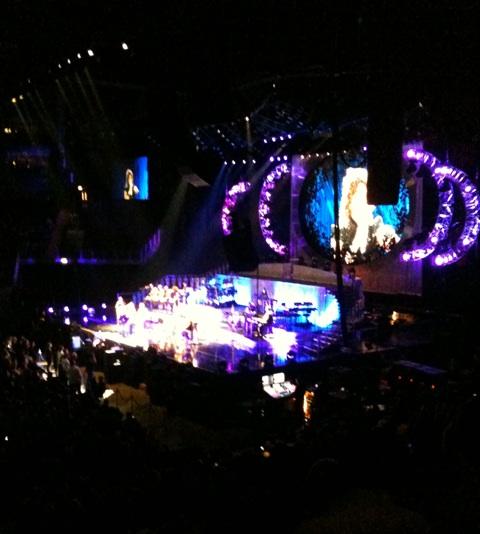 Last night we went to see Whitney Houston at the O2 Arena in London. We love a bit of Whitney… after all, she is a living ‘legend’, she has recorded some amazing songs and her current album ‘I Look To You’ is really rather fantastic.

To write a Whitney review or not to write a Whitney review, that is the question especially considering how the press has really ‘gone’ for Whitney during this world tour, whether it be critiscing the voice, the appearance, the odd onstage behaviour, cancelling shows due to illness… all quite unnecessary. What’s interesting is the fact that UK newspaper The Sun filed a positive review on their website after the first UK show in Birmingham, only for it to be taken down hours later and rewritten negatively once other media outlets had begun to publish reviews of the so-called disastrous show.

Last night, the majority of the arena were willing her on and supported her however she looked and whatever she sounded like. On the whole it was FANTASTIC, Whitney commanded the stage, the upbeat moments were the real highlight. It wasn’t a perfect show though, the acoustic section was too lengthy and lacked momentum BUT Whitney proved that she still has star quality. She unaplogetically and endearingly showed a human side – it was an open and honest performance, a reflection of who, what and where Whitney Houston is right now, displaying a range of emotions showing the audience both her vulnerability and her strength and for that the audience was right with her all the way and loved her even more for it!

Setlist highlights: ‘For The Lovers’, ‘Nothing But Love’, ‘Your Love Is My Love’, ‘Its Not Right But Its Okay’, ‘I Learned From The Best’, ‘I Love The Lord’, ‘I Wanna Dance With Somebody (Who Loves Me)’ – especially the ‘you sing’ bit – AMAZING, ‘How Will I Know’ and ‘Million Dollar Bill’.

If you’re going, go with an open mind, ENJOY it for what it is and don’t believe anything you read or hear in the press…