We expressed our disapointment at the Diana Vickers album cover some time ago, we’re over it now thankfully. The pictures in the album sleeve are rather pretty ESPECIALLY the one below which surely would’ve made THE most brilliant album cover EVER!!! The album sleeve contains the lyrics (HURRAH!) and the album thank-you’s are very touching as well, it’s lovely to read Diana’s dedications to the musicians and collaborators. 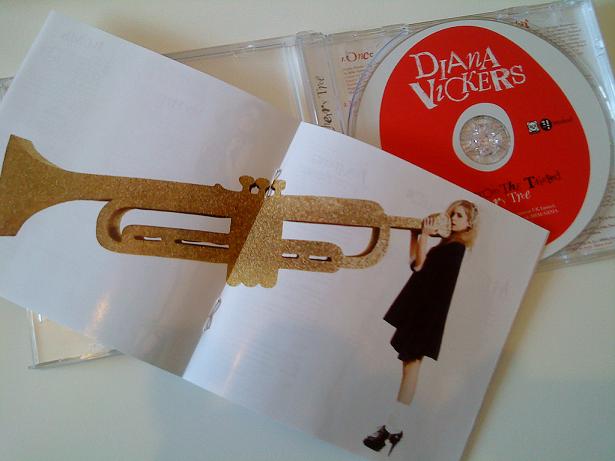 But, is the album any good? Yes, it is rather! The girl with the voice like ‘Marmite’ has produced a stunning collection of songs, it’s not perfect but it shines brightly and shows great promise.

‘Once’ is a special one in a career type of song, the rest of the album is of a very high standard but ‘Once’ is really THE standout track and in a different league really. ‘Remake Me & You’ is an Ellie Goulding collaboration and it is distinctively Ellie Goulding in it’s lyrical stylings – it’s a highly enjoyable fizzy little number. ‘The Boy Who Mudered Love’ is an awesome song, the lyrics make reference to the album title and it’s the PERFECT late summer driving whilst the sun sets kind of song. ‘Four Leaf Clover’ is the first ballad of the album, and has a lovely orchestral feel to it. ‘Put It Back Together’ is probably our highlight, it’s a track written by Nerina Pallot and produced by Nerina along with her husband Andy Chatterley. Diana sounds gorgeous and the song itself is hauntingly beautiful. It starts with an eery etheral, sparse sound that builds to a powerful, full on thumping sound. Delicious!

‘My Hip’ is brilliant, the inclusion of the trumpet is a master stroke… album credits reveal the instrument is in fact played by Miss Vickers herself – nice! ‘N.U.M.B’ is a lovely piano led modern day torch song, Diana sounds divine. ‘Hit’ is a cover of The Sugarcubes early nineties single – it works and will no doubt bring the song to a new audience. Although it was given away as a mailing list freebie ‘Jumping Into Rivers’ deserves its place on the album and is very necessary as it serves to break up the slower songs towards the end of the album.

On the whole, it’s a cracking, confident and classy debut album… the album contains good solid pop songs and because it’s not trying to be anything else it works magnificently. It might take a few listens for some songs to weave their magic as some tracks are less immediate but the perseverance is very worthwhile!