The new Kelis album has arrived… ‘Flesh Tone’ is in stores from Monday 17th May. The booklet features this terrifying yet AMAZING shot of Kelis as half woman, half lion! 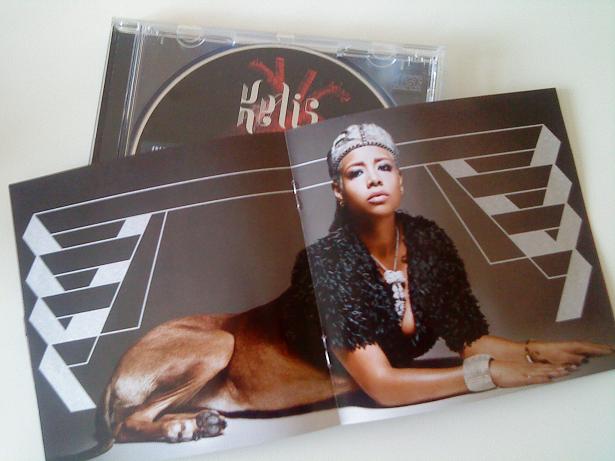 ‘Flesh Tone’ is utterly fantastic and a properly AMAZING album! Kelis could sing anything and make it sound good, the new dance direction is superb and totally convincing. Kelis described the album perfectly, summing it up as “something you can get sweaty to.” BRILLIANT!

People often say iTunes killed the album, as albums can now be disregarded in favour of individual tracks. The beauty of ‘Flesh Tone’ is that it is cleverly woven together throughout by a series of segues which creates what sounds like a continuous mix… as a result ‘Flesh Tone’ makes most sense when it is listened to in it’s entirety from start to finish.

The album is only nine tracks but this totally works and as a result it packs an impressive punch with each song being thoughtfully produced and well crafted – much of the lyrical content on the album makes reference to her son Knight, and the positive affect he has had on her life, it is achieved without sounding slushy or twee.

Kelis sounds beautiful throughout – on opening track ‘Intro’ her voice sounds somewhat mournful especially with the lyric “everytime I think I’m free you win”. Both ’22nd Century’ and ‘4th Of July (Fireworks)’ must be single releases from the album – both are simple yet highly addictive. ‘Home’, ‘Scream’ and ‘Brave’ are real highlights too. ‘Emcanpicate’ is a glorious stomper that builds to a huge climax.

‘Flesh Tone’ is a brave step into a new direction, it’s unlike anything out there at the moment and it’s a complete triumph! Bravo…