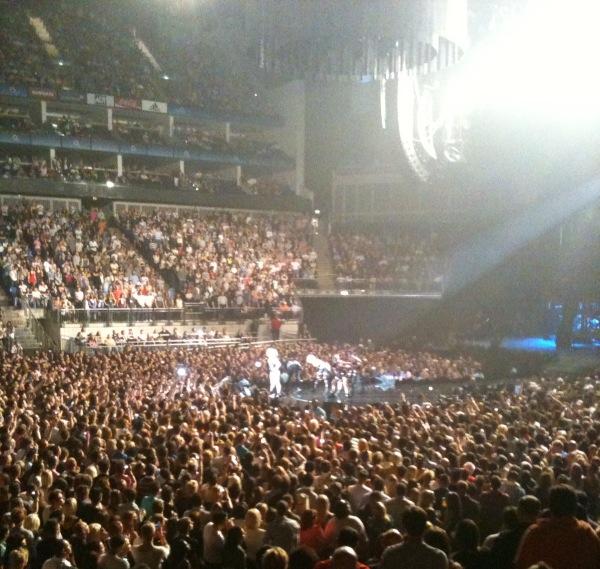 We went to see Lady GaGa at The O2 in London last night. Before the show we we worried that GaGa would mess around with the arrangements of the songs as she so often does for TV and award showsbut thankfully, we didn’t need to worry – all the songs were faithful to the original and they sounded magnificent for it!

GaGa attacked the stage throughout – there was nothing subtle about her performance, it was commanding and dominating. Highlights included ‘Telephone’, ‘So Happy I Could Die’, ‘Alejandro’ and ‘Bad Romance’, which really is an AMAZING song. A rousing cover of ‘Stand By Me’ was received as well as her own work. Her voice was on point throughout and considering the movement she was doing – it was an impressive display of her vocal abilities. The costumes became more bizarre and outlandish as the show progressed – the dress worn during ‘So Happy I Could Die’ was our favourite, it had wings and it MOVED of it’s own accord, plus the now infamous spark/flame flashing bra outfit was updated to feature sparks coming from the ‘downstairs’ area too. The staging was effective – there was a piano on fire and the gyroscope called The Orbit made an appearance during ‘Bad Romance’… we’ve seen more impressive concerts in terms of stages, props, themes and so on but considering it is her first headline arena tour it was a fantastical start.

The stop start, stop start feel to the show was very distracting, it felt like the show never really got going because the costumes were being changed so frequently – the concert lasted short of 2hours and 20minutes – which, was too long and could have been condensed by losing the irratating ‘we’re going to the Monster Ball’ dialogue, the very pointless ‘Posh’ and playing the piano with her foot as well as cutting songs such as ‘Boys Boys Boys’ and ‘Money Honey’ to name a few elements. On the whole though, it was a might performance from GaGa and her band.