Last night we went to see Leona Lewis at The O2 in London. The tour entitled ‘The Labyrinth’ has been on the road for a couple of weeks now but last night was the first of four London dates and Leona’s first hometown gig of the tour. We also realised how few, UK artists play or sell out arenas these days and what an achievement it is to do so… in fact, the last UK band we saw in an arena setting was in May 2009! Not too much pressure then… 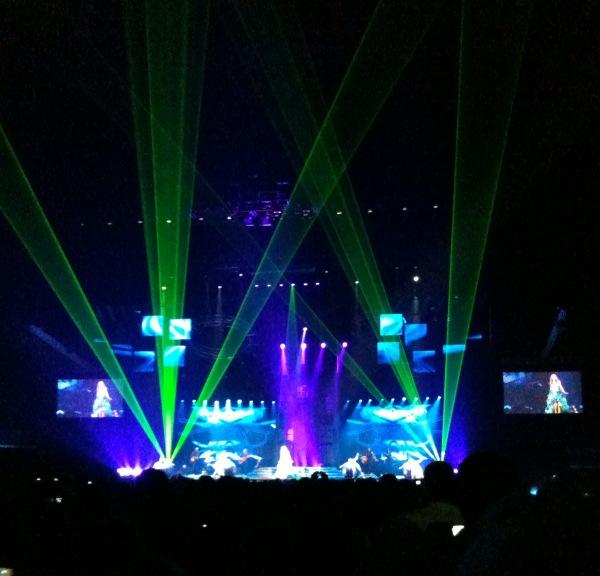 The show as a whole was truly phenomenal… it was clear that a lot of love, thought and dedication had gone into the show, every detail had been considered and executed magnificently. The staging was incredible throughout… the lighting was stunning – it was so diverse and matched the tone for each song. The set itself was beautiful, it allowed the performers onstage to really convey the idea that it really was another magical, fantasy world. Each act focused on portraying different aspects of this fantasy world and it worked brilliantly. The video projections were fantastical too, often the video screens held different  pieces but collectively created the whole… masterful. Visually there was so much to take in, it was very exciting!

Leona gave a mightily impressive, commanding and confident performance showing that she was in control throughout… opening track ‘Brave’ a was brooding choice… the dancers wearing horns and the aerial performers framed the entrance perfectly. Leona ordered the audience on their feet before singing the third track of the night and the crowd stayed on their feet for much of the show too. The video interludes between the different sections of the show were extremely clever, each time they presented Leona sporting a different look and it took a while to realise that it was Leona at times. Several tracks had been updated or re-imagined, ‘Better In Time’ (amongst others) became guitar driven which helped to create new energy within the songs, and Leona’s vocals were flawless… pitch perfect and stunningly breath-taking throughout.

The set-list was at times a little frustrating due to the number of cover versions (whether performed live or as video interludes between the different sections of the show). Although, upon reflection two cover versions appear as track on Leona’s album and the rest were fun, upbeat and surprising choices PLUS this was probably intentional to remind everyone that there is more to Leona Lewis than ballads… her cover of ‘Sweet Dreams’ by Eurythmics was outstandingly great!

Setlist highlights include: the simplistic delivery of ‘Don’t Let Me Down’, the impressive imagery on the video screens during ‘I See You’, ‘Happy’ for its amazing spingetinglingness and ‘I Got You’ which featured some unexepected aerial acrobatics from Leona. The energy of ‘Outta My Head’ and the sea of mobile phone lights waving in the air during ‘Run’ helped to create a powerful and completely fantastic climax to the show.

The entire production felt like a rare treat… it was simply wonderful, one of the best concerts we’ve been to in ages plus it was easily and miles better than anything we’ve seen the big American artists present for well over a year. ‘The Labyrinth’ is a total triumph and it highlights that Leona is a truly sensational world class performer who can command the stage. Bravo to Leona and everyone involved!