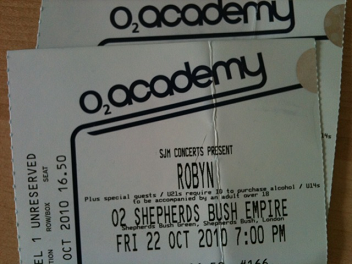 There really is no-one quite like Robyn and she most definitely hammered home that point with an unstoppable and phenomenal show at Shepherd’s Bush Empire in London last night.

Gracing the stage to a mighty backdrop of heady beats and swirling lights Robyn opened with ‘Fembot’ and for the next 90 minutes or so she whipped London into a non-stop frenzy. The impressive thing about the show was the momentum, it was flawlessly mixed together, each song interwoven meaning the music never stopped – each song as strong and as powerful as it’s predecessor… it felt as though the beats were relentless and each song sounded hugely triumphant.

On stage, Robyn is an incredible tour-de-force… her dancing was fierce, each move completely connecting with the beat, the way in which she attacked and owned each aspect of the night was stunning, she exudes boundless energy and clearly gave every ounce of her being during the performance… her vocals were impeccable too. The band consisted of two drummers and two DJ’s, programmers who were responsible for everything else including the ground pulsating beneath our feet throughout the show. A special mention for the lighting design which also was hugely superb.

Setlist highlights included the magnificent single version of ‘Indestructible’ which Robyn revealed to paraphrase, ‘they don’t do very often’. ‘Hang With Me’ sounded mega, especially with its mighty and rousing chorus. ‘We Dance To The Beat/Don’t F**king Tell Me What To Do’ was pure genius, the two microphones on stage and they way in which the live vocals were programmed was brilliantly executed. Both ‘Dancing On My Own’ and ‘With Every Heartbeat’ are amazing tracks – live, they were even more so.

There was an unexpected double encore… consisting mostly of older tracks, we spotted Ellie Goulding singing every word to ‘Be Mine’, a cover she had previously recorded as a duet with Erik Hassle. The dirty reggae beats of ‘Dancehall Queen’ reverberated around the venue during the second encore, inducing some spurious movements from the audience. Apt, closing track ‘Show Me Love’ was sung word perfectly by what seemed to be the entire audience… love for the lady indeed! In short, IMMENSELY BRILLIANT!

If you missed Robyn, she will play The Roundhouse in London on Thursday 3rd March 2011, tickets are on-sale now!