Firstly, we have always LOVED live music here at Pop Cart… there’s nothing greater than hearing live vocals and arrangements plus the sense of excitement and occasion is the ultimate high.

As a result, we also LOVE live albums. As kids, we would record our cassette collection onto blank cassettes and scream in between the songs to make it sound like a live album – oh dear, how tragic!

Moving on… last month the extremely incredible Eliza Doolittle completed her biggest UK tour to date selling out venues across the country including a stop at the Shepherd’s Bush Empire here in London. The 2,000 people venue dwarfing the 350 capacity venue of her previous date around the corner at Bush Hall six months previous.

Eliza is such a brilliant and likable live performer (despite what Popjustice claims – grrrr!) and as a result, we’ve seen Eliza live ten times since 2009. The latest tour was her most spectacular yet… this time around the show boasted a brightly coloured set, greater production values, backing vocalists and a keyboard player!

During the tour, two shows (one in Manchester and the other in London) were recorded and have been made available to buy. The image below shows the cover (it’s a scan from the digipak so apols for the pixelated quality)… 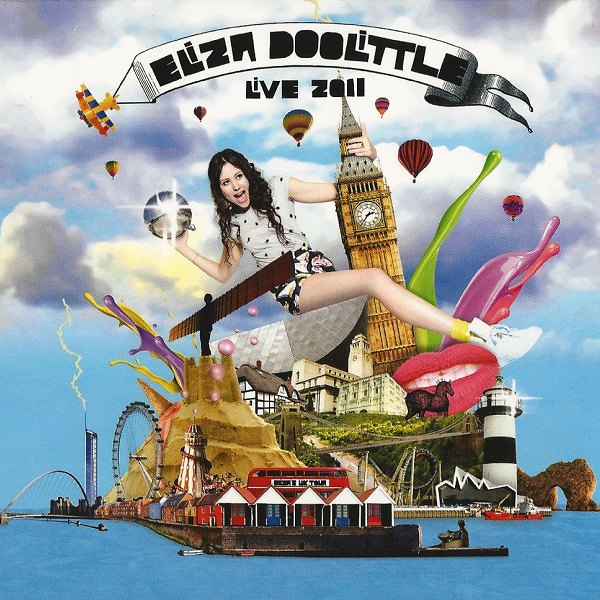 One of the most striking things about Eliza is her astonishing voice which soars magnificently across the seventeen tracks on offer on this recording. Her choice of cover versions is always a treat – for this tour, she played a jazzy, lounge style rendition of ‘Grenade’ by Bruno Mars and a brilliantly unexpected cover of ‘Runaway’ by Kanye West. She also includes a gorgeous interpolation of ‘Lovely Day’ by Bill Withers during her own ‘Back To Front’.

Other musical standout moments include stunning versions of ‘Missing’ and ‘Rollerblades’.

You can always tell the measure of a good entertainer by their in between song banter and it’s a joy to hear Eliza’s chats during songs. Highlights include being genuinely thankful to the audience, her love for London and not wanting the audience to think she’s a drug addict due to having had a blood test!

The whole package is a must have for all fans as it captures the joy and excitement of seeing Eliza live perfectly!

You can listen to previews of the songs, order a CD or download the show from either Manchester Academy 2 on 30th March 2011 or from Shepherd’s Bush Empire on Saturday 9th April by visiting Eliza’s live store by clicking here.

In other news, on Wednesday May 18th at 7:30pm (BST) you can watch Eliza perform live for The Carphone Warehouse on their Facebook page – more info by clicking here.