This brand new year is already off to a blistering start for the wondrous Frances Ruffelle! Here’s a rundown of all things Frankie… 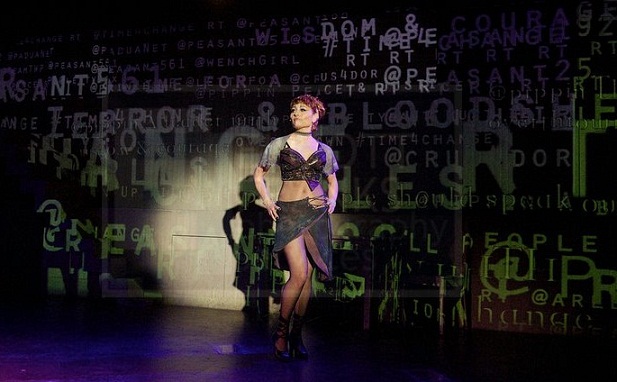 Frances is still currently starring in the Menier Chocolate Factory’s re-imagining of 70’s musical ‘Pippin’, portraying the role of Fastrada in the magnificently brilliant show that features the songs of Stephen Schwartz and the original choreography of Bob Fosse. ‘Pippin’ has been met with rave reviews since opening in November 2011 and has been a big giant hit with all that have witnessed the truly remarkable production… the staging, visual effects and choreography are phenomenal. The show feels really special when you watch it, there is such quality of conviction in the way in which has been created and put together unsurprisingly Frances shines so very magnificently in her role – it is a uniquely wonderful show and you really MUST go and see it before it closes on 25th February.

Here, you can listen to Frances and co-star Harry Hepple discuss the show and their subsequent roles with Penny Smith for the BBC Radio 2 Arts Show, broadcast in December 2011.

Tickets for the remaining few weeks of ‘Pippin’ are available directly from the Menier Chocolate Factory’s website by clicking here.

On Sunday 12th February 2012, Frances revives her completely astounding one woman show ‘Beneath The Dress’ for a one night only performance at the Menier Chocolate Factory. Originally conceived and performed in 2009 at Madame JoJo’s, Frances took the hugely successful and triumphant show to Edinburgh Festival in 2010, as well as the Bath Music Festival and the Marlborough Jazz Festival in 2011.

The show has something for everyone, it is a joyously funny, sexy and seductive piece, tongue firmly in cheek throughout and performed with the warmth, grace and passion that only Frances can deliver. Backed by her six piece band, ‘Beneath The Dress’ really is a STUNNIGLY glorious piece of work that you simply MUST experience, enjoy and savour.

More information and tickets are available from the venue website here.

Finally, in December, an EP was released of songs that were work-shopped for a musical entitled ‘Change The Day’ written by Tricia Walsh-Smith and Simon Kay. Frances appears on two of the three tracks ‘Sellin’ My Soul’ and ‘Behind The Veil’ – you can download the tracks from iTunes (UK) here and Amazon (UK) here.

Also, don’t forget that Frances’ sublime catalogue of music is now available digitally! The albums ‘Fragile’, ‘Frances Ruffelle’, ‘Showgirl’, ‘Imperfectly Me’ and ‘Purify’ by paTala (a side project created with Sam Boner) can be bought from iTunes and all other good online music retailers. For more information visit Frances’ official website here.