Last night we were VERY lucky to attend the world premiere of Les Misérables at both the Odeon in Leicester Square. Upon walking along (translation: herded as quickly as possible) the red carpet, amongst others we spotted the simply divine Frances sporting a beautiful long flowing purple (?) gown clutching the arm of Cameron Mackintsoh for warmth on the bitterly cold night as they posed for photographers – seeing those moments, you really do have to pinch yourself! 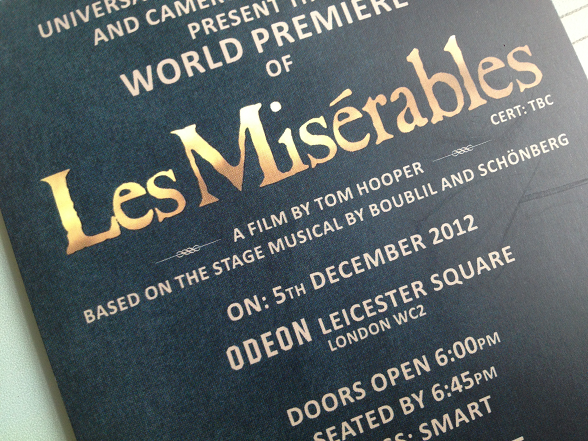 Anyway, we have been fortune to attend a few other premieres this year and you may or may not know that once inside, the cinema screen relays a video feed of what is going on outside, so if you are crying your eyes out over meeting whoever on the red carpet, the audience gathered inside the cinema are probably chuckling at you – with warmth and affection of course. Michael Ball did a terrific job interviewing the cast on the red carpet.

Also, once inside the cinema, you may or may not know that before the film begins the producers, writers or directors assemble on stage to formally introduce the piece by welcoming the principal cast to join them – in this instance Anne Hathaway, Helena Bonham-Carter, Sacha Baron Cohen, Russell Crowe, Hugh Jackman, Samantha Barks and Eddie Redmayne joined Director Tom Hooper and others who had created the film.

The biggest cheers and warmest reception was very rightly reserved for the two youngest stars of the movie, Daniel Huttlestone who portrays Gavroche and Isabella Allen who characterises the young Cosette. 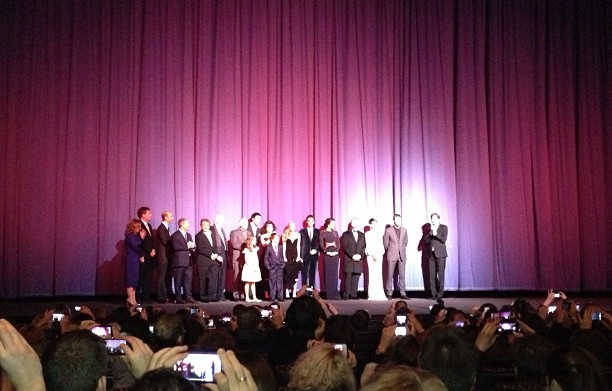 Rather sheepishly, we must admit to never having seen the musical before. We know and love the songs though – any Frances fan will have the original cast recording. Never having seen the musical before but knowing the songs actually helped enormously as the lavishly shot and expansive scale of the film impressed from the opening sequence. There was such intimacy, tenderness and care given to the treatment of the songs – each of the showstopping numbers was visually cohesive, simple and elegantly shot – the message and emotion within these songs was almost a character within itself and the actors gave such wonderful performances. Even more astonishing is the live performances of the musical numbers, which were unaided and untouched after filming – it made the music even more special.

We were literally on the edge of our seat waiting for THE appearance of Frances who has a cameo as “the most fabulous whore” during the ‘Lovely Ladies’ sequence. Even with around twenty seconds on screen, thick set make-up and yellow hair – it is glorious when you were able to spot *that* face, simply unmistakable – the audience downstairs cheered upon seeing her – fingers crossed that it was loud enough for Frances to hear upstairs. Also, as a fan, it was so magnificent and pride-filling to see her name scroll-up during the end credits!

As an aside, you can read a new insightful blog post written by Frances for the Huffington Post, in which she recalls the initial development, rehearsals and opening performances she experienced, in the role of Eponine as part of the originating cast in 1985 by clicking here.

The rest of the movie was astonishing, the performances were captivating, heart-stopping and arresting. It was emotive and funny, joyous and triumphant. The closing sequence, spectacular. The strength in the story and the songs makes it clear why the West End and worldwide show has been thrilling audiences for twenty-seven years now, the film will now ensure that the legacy continues for many more years.

In other beyond exciting Frances news… 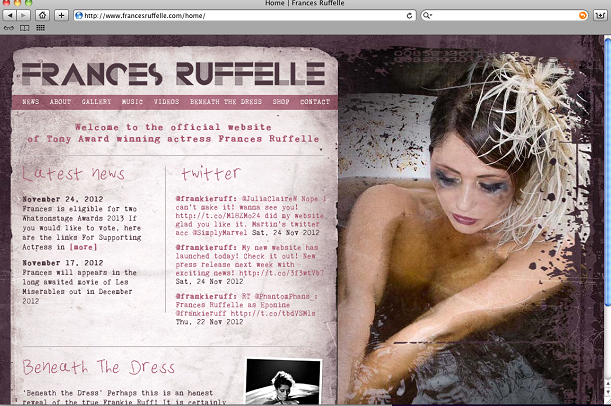 The Frances Ruffelle website has been updated and now features a host of exciting content from rare pictures to Frances discussing her albums. It is essential visiting – make sure you do so by clicking here.

Frances it set to portray Edith Piaf in the award winning play entiled ‘Piaf’ by Pam Gems, which originally opened at the RSC in 1978. The new production will open at the Curve Theatre in Leicester and run throughout February and March. Further information and tickets are avialble here.

2013 sees Frances on the big screen once more starring as Kim in the film ‘Devil’s Tower’ alongside Roxanne Pallet. Slated for a release on 5th April, this horror film will be a MUST see upon its release! Read some insights from Roxanne about the film here.

Finally, Frances is soon to announce further dates of her phenomenal and stunning one-woman show ‘Beneath The Dress’. Taking the show to New York in April, audiences will be treated to a glorious piece of work.

Finally, finally, we should mention that we’ve heard three one minute clips of new tracks recorded by Eliza recently. The tracks had an instantly catchy laid back vibe and sounded incredible. The vocal was particularly stunning. Lyrics from the songs included lines such as ‘waste of time, I’ll waste some of yours if you waste some of mine’, whilst another featured lyrics ‘Euston Road, or at least we got each other.’ With Eliza still in the studio, it’s already shaping up to be an AMAZING album when released in 2013!