A few years ago, we were mocked and ridiculed for the feature ‘Popstar Advent Calendar Watch’ – (you know who you are  – *shakes fist*) so we didn’t bother again, that and the fact there had been little popstar adventing action to report in the intervening years.

HOWEVER in 2012, the notion of a popstar advent calendars seems to have been revived, with no less than THREE of the absolute bestest best popstars having their own countdown to the holiday season (FYI – Ed Sheeran has one too, he’s called it an ‘Ed-vent Calendar’ – inspired!!!) 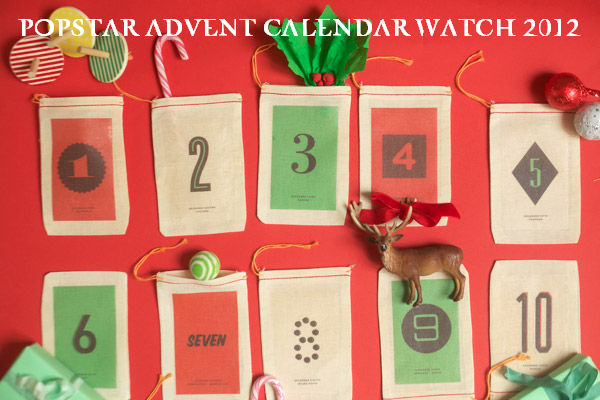 The three below in this exciting instalment of ‘Popstar Advent Calendar Watch 2012’, all cater for different needs, which is perfect – maximum satisfaction and enjoyment for everyone – HURRAH!

It is important to point out that one of the advent calendars features a yule log recipe (YUM) and if this were a competition, it would clearly win the title of ‘Ultimate Popstar Advent Calendar of 2012’ for this creation alone (we’d rather not spoil it and tell you which one so you’ll have to look at all three to find it for yourselves). As it’s not a competition, here are the three most fantastical Popstar Advent Calendars of 2012 (so far anyway)*…

Firstly, the divine Miss Minogue. ‘K25′ has seen Kylie glancing to the past, in order to celebrate and acknowledge how wondrous her career has been. 2012 has seen Kylie showcasing all kinds of exciting projects from the unexpected new track ‘Timebomb’, the beyond heavenly ‘Anti-Tour’, ‘Proms In The Park’ and the beauteous ‘The Abbey Road Sessions’ album.

Leading up to 25th (K25 surprise tweet to unlock day) Kylie offers fans treats – so far, in the form of special competitions to win signed books and CD’s as well as exclusive never before seen photographs – with the rest of the month ahead, it’s certain to be thrilling for Kylie fans.

The greatest thing about the advent calendar is the AMAZING collage of Kylie throughout the years. In turn, it’s a fitting end to an exciting year celebrating one of the most incredible popstars ever! 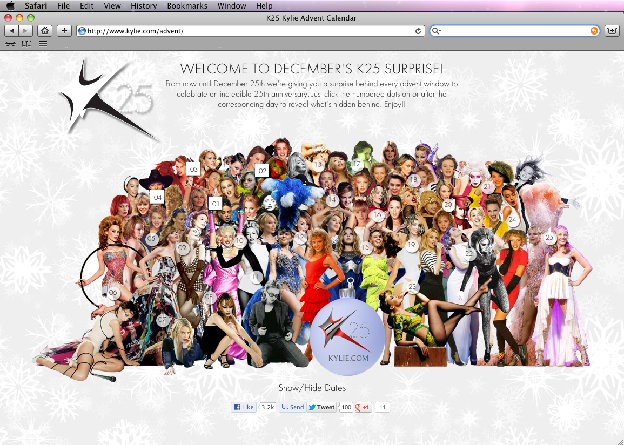 Next! The glorious Bright Light Bright Light is responsible for THE most gorgeously sublime debut album of 2012 ‘Make Me Believe In Hope’ – it is so very stunning! The album moves from dancefloor with euphoric tracks such as ‘Feel It’ and ‘Love Part II’ yet leaves you an emotional wreck with the heartbreakingly haunting ‘Moves’ and ‘How To Make A Heart’ – Rod really is an outstanding craftsman of magnificent pop songs.

Everything about the album release campaign was so well executed and presented. The album was released as a coloured cassette, on vinyl and CD. There were also t-shirts, limited edition box-sets, mix-tapes, live shows and more. You MUST investigate further, trying exploring Rod’s store here

The Bright Light Bright Light advent calendar is very fantastic indeed – each day, Rod offers fans the chance to download a special mash-up of tracks from his tremendous album with a nod to pop classics throughout the years that have shaped and inspired his sound. So far, available to download is Rod’s glorious mash-up of Kylie’s ‘Get Out Of My Way’ with his own track ‘Cry At Films’. Other gems mashed include the immense ‘Show Me Love’ by Robin S. and ‘Toxic’ by the delicious Britney Spears.

It’s a completely brilliant concept and gives a real insight into the man behind the most wonderful album of the year. 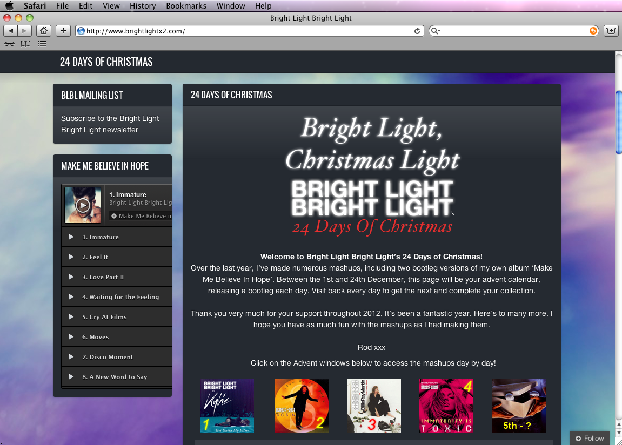 To sample the sensational treats from Mr Thomas, click here.

Finally, the exquisite Tracey Thorn, released her beautiful Christmas inspired album ‘Tinsel And Lights’ in October. The album sees Tracey write a pair of new Christmas songs as well as triumphantly taking on the classic Christmas standard ‘Have Yourself A Merry Little Christmas’. The root of the album is Tracey, showcasing strong and finely crafted versions of winter themed tracks from the likes of Jon Mitchell, Sufjan Stevens and The White Stripes. Throughout the album, the vocal sounds a gorgeous as ever with each track delivered with such warmth and tenderness.

The ‘Tracey Thorn Tinsel And Lights Advent Calendar’ has so far showcased a making of the album video featurette and an acoustic video performance of ‘River’. 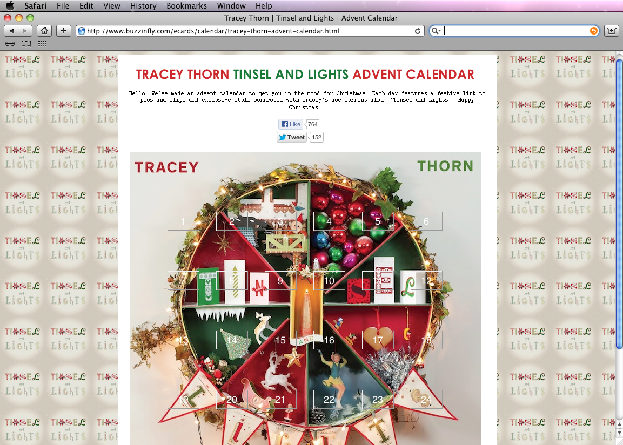 As an aside, the Swedes of the Universal Music variety have got in on the action too and have a special YouTube countdown – it features popstars doing live performances of their songs and a man talking rather alot – have a butchers here.

*If you find any more popstar advent calendars, please do get involved and touch via Twitter,  @Pop_Cart to make recommendations.