With the exception of the mighty Spice Girls and Girls Aloud, everyone knows girl bands are best and their most brilliant with three members – TLC, The Supremes, Destiny’s Child, SWV, Bananarama, Mis-Teeq, Cleopatra, The Pointer Sisters, Atomic Kitten, Martha And The Vandellas, Honeyz, 702, Jade, Wilson Phillips, Blaque, Fierce, Exposé, Kleshay, Sugababes and Eternal (although they were at their most dazzling as a four piece) – the list of beyond amazing three-piece girl bands throughout time is seemingly endless.

Without any doubt, Stooshe qualify with great gusto for inclusion amongst the list of really glorious threesomes. Alexandra, Courtney and Karis are full of boundless energy, optimism and fun – they are infectious and most importantly likeable characters. They have a unique and individual style and distinctive sound. We LOVE a bit of Stooshe ESP a bit of live Stooshe, we’ve seen them numerous times now across London town whether it be a headline show, festival slot or most notably supporting Jennifer Lopez at The O2, as a live band they are wildly entertaining. Their songs translate very well on stage and the vibrant personalities of each member shines and complement the other.

Despite being relative newcomers, Stooshe have certainly made a mightily impressive start in the quest for chart domination. Their debut single ‘Love Me’ peaked at number 5 on the Official UK Singles Chart and its follow-up ‘Black Heart’ reached number three becoming the longest running chart appearnce of 2012, shifting over 400,000 copies and earning the girls a BRIT Award nomination for ‘Best Single’ in the process. Another single, in the shape of ‘Waterfalls’ failed to reach the dizzy heights of their previous efforts, so their debut album was postponed and the band retreated to rethink #sadface 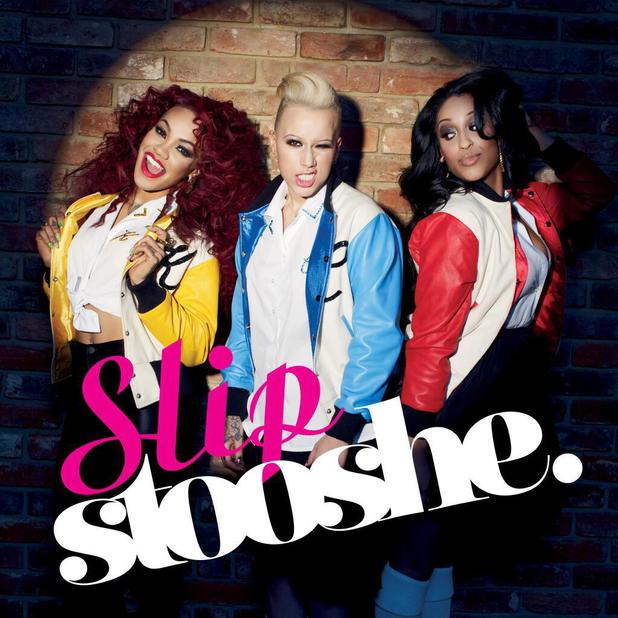 Yet, fear not – today after MUCH teasing, Stooshe unveiled their new single, ‘Slip’. The track itself was produced by Future Cut who worked magic on their previous releases as well as working with artists such as Beverley Knight, Lily Allen and Olly Murs. The bowling inspired video was shot and directed by Bryan Barber, whose credits include videos for the likes of Christina Aguilera, Kelly Clarkson and Alexandra Burke.

‘Slip’ is a heady, great big giant feel good song, it is driven, chaotic, in your face, action packed and ultimately hugely exciting. The sound has a retro yet modern twist so that it rises above being a pastiche of vintage soul and sounds great turned up full blast, more importantly it will sound amazing on the radio, which is certain to help ensure another enormous hit. The chorus is extremely catchy and the vocals from all three members are strong and full of character, plus there are superbly impressive ad-libs from Alexandra, Courtney and Karis towards the end of the track too.

Bravo indeed Stooshe! ‘Slip’ is set for release on 12th May and is available for pre-order from iTunes here. Their debut album will be available from 27th May.