Everyone’s favourite Scottish band, Travis are back! Following a period almost five years apart, during which time included a fantastic solo album entitled ‘Wreckorder‘ from frontman Fran Healy, the four piece have reunited to record a new album, which is their first together since the extremely handsome ‘Ode To J. Smith’, which appeared in 2008.

The bands seventh studio album is now complete and to celebrate, they released a track as a pre-single entitled ‘Another Guy’ as a taster of what to expect. In a message on the bands website, Fran explains the creative process with particular reference to the amazing video that accompanies the song. 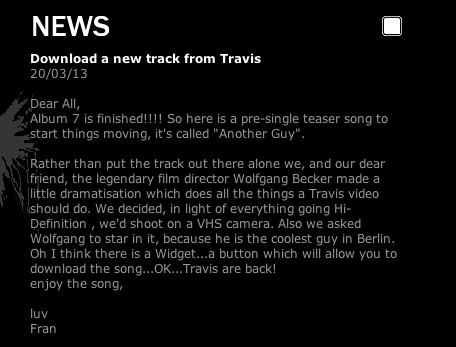 ‘Another Guy’ is yet another fine slice of finely crafted music from the boys – the simple hypnotic guitar rhythms, the repetition of the lyric within the structure of the song and the monotony within the vocal are assured and delectable – it is charming and affecting. The video is all kinds of amazing, there is great humour and zest within the action whilst its old fashioned tendencies have a lure of seductiveness.

Welcome back indeed! ‘Another Guy’ can be downloaded from the bands website here, or by using the widget below. Alternatively, it can be purchased from iTunes here.