In February, we went to see Little Mix live, as the band played the final date of their first headline tour at London’s Hammersmith Apollo. We forgot to tell you all about it at the time – apols!

The thing we remember most about it, is that it was simple, cutesy and fun – the girls seemed to be a tight and solid unit and given a mere eighteen months together, they were remarkably well polished and extremely likeable… they had a good spirit and seemed to relish the opportunities of being on-stage. The show featured music from their debut album ‘DNA’ as well as a few too many cover versions, which whilst entertaining, were unnecessary given the time that has passed since they won The X-Factor, although their medley of hits by R&B girlbands was a revelation for adults but lost on much of the rather young audience members. A particular highlight within the set was the catchy ‘How Ya Doin’?’ which we recall evoked an energetic routine that was performed vigour and sass, with Jesy’s vocals standing out particularly during the pre-chorus. 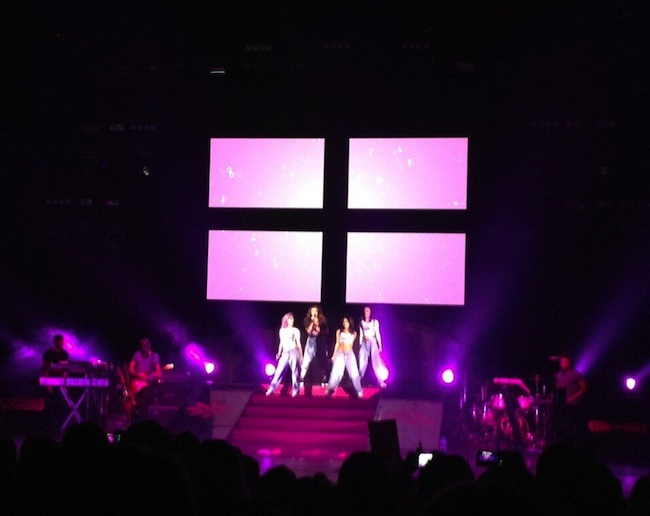 Fast forward six weeks, the girls have re-recorded parts of the track for a single release – there is a new bridge and new refrain within the chorus. Most notably, the track now features the legendary and incomparable Missy Elliott who pops up to deliver a verse – swanky! ‘How Ya Doin’?’ was written by former All Saint Shaznay Lewis and samples Curiosity Killed The Cat’s 1989 hit single ‘Name And Number’.

The newly unveiled video is a vibrant, brightly coloured affair complete with cringeworthy hair care product placement – it is a fresh and bold romp as the girls play dress up ahead of a night out in a club. The biggest shame is that Little Mix do NOT share a scene with Missy – THAT would have been a great moment, but as it doesn’t happen, it cheapens the idea of the collaboration – much like the recent Olly Murs and Flo Rida hook-up. Nevertheless, it’s still a great track and the revamp is certain to do well as a single for the girls.

Nice  job Little Mix! ‘How Ya Doin’? featuring Missy Elliott is released as a single on 6th May.