A couple of weeks ago we had a jaunt to see new musical ‘Once’ ahead of it’s official opening at the Phoenix Theatre in the heart of the West End.

Having only heard of the film that inspired the show beforehand, we knew nothing of the tremendous success the musical show had encountered during its run on Broadway and so turned up with little expectation and zero preconceived notions – which was perfect given what happened! Upon arrival, Tony Blackburn was having a nice chat to Michael Burke in the foyer. We saw Vanessa Feltz take her seat a few rows away and during the interval, spotted Penny Smith, who seemed remarkably lovely when cornered by a student asking her advice.

Anyway, taking seats at 7:10, there was already a hive of activity on the stage, the supporting cast were people playing instruments, songs were being sung and members of the audience wandered up and onto the stage – it seemed strangely bizarre but a completely lovely and unique way to relax and welcome the audience. 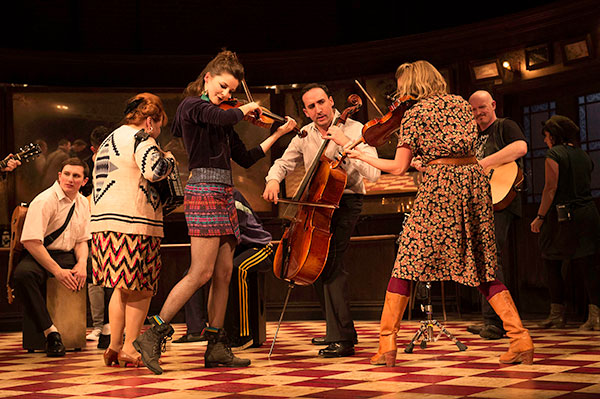 By, 7:30 the show began but you’d be forgiven for not realising as it seemed like a seamless continuation of the earlier laid back performances. The opening number set the mood and tone of the piece supremely. The simple acoustic guitar led number with rousing vocals framed beautifully with live accompaniment.

One of the most striking element of the piece is the staging – the cast is for most of the production are sat around the perimeter of the stage, each cast player is equipped with an instrument and assists with the orchestration during the songs. There are huge mirrors and picture frames covering the walls which not only reflect the cast on stage but the audience as well – it helped to create a sense that everyone was in this together.

Essentially, the musical is piercingly beautiful, passionately tender and thought provoking. The story centres around the lead character who is a frustrated musician, has lost the love of his life and feels hopeless with his lot. After meeting the female lead who enthuses about his music the pair form a bond centred around their passion for music. The action is presented simply without elaborate set pieces but with an imaginative descriptive element that emphasises the power of words within the dialogue and stories captured within the songs. It was funny, there is great lighthearted spirit that underpins the story, the characters are real and likeable – an a member of the audience, you root for them and wish them well throughout. 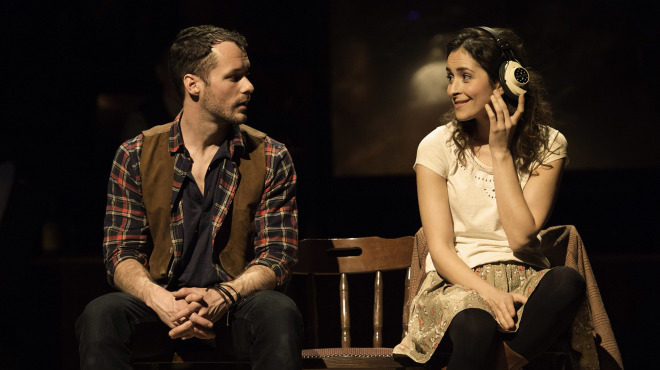 At the heart of the piece is the absolutely stunning and arresting musical numbers. The narrative and action gives rise to emotive and devastatingly beautiful and hauntingly songs – the music lifted and roused, there were goosebumps on the entire body and an enormous sense of triumph, joy and sadness swept across the audience as the songs were performed. Lyrically the songs captured the essence of love and of being human, so they resonate incredibly powerfully within the soul, they steal your heart and you happily let them – you feel every single lyric, note or movement to the core. Every fibre and ounce of being is invested as you take the journey of ‘Once’ and when you emerge, the whole sum of its parts – lingers and stays with you, within the conscience and the soul.

‘Once’ is simple yet extremely powerful, emotionally captivating and sublimely outstanding. It is unconventional and unlike any musical you will have seen or experienced before and for that reason alone it is truly charming and incredibly special.