Last night we went to play with P!nk as ‘The Truth About Love Tour’ rolled into London town for the first of four dates at The O2 in the capital.

We’ve been fortunate enough to witness P!nk’s staggering live shows many times now and with each tour, she gets more extreme, wild and daring… it is fascinating to witness and hugely thrilling and exciting to be part of. ‘The Truth About Love’ show was mindblowingly supreme. P!nk is THE ultimate show woman, and this high octane show was extravagantly dazzling and one which fearlessly pushed the boundaries that combine dance, strength and acrobatics even further than the previous and already incredible live productions she has presented before. 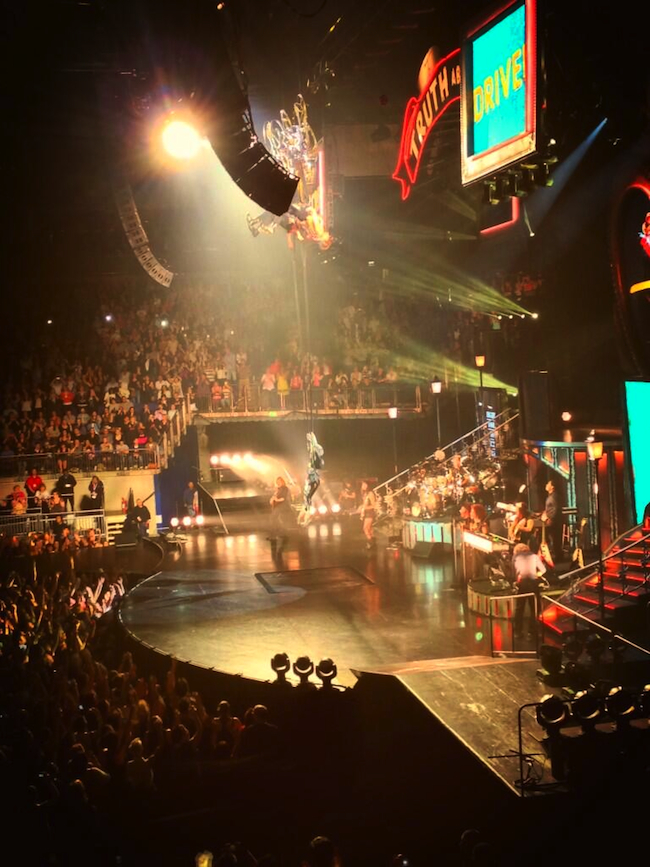 There were genuine moments throughout the concert that were heartstoppingly breathtaking, for example, the exciting bungee routines of the show opener ‘Raise Your Glass’, the wild spinning cage used to perform ‘Sober’ was wildly brave, the recreation of the ‘Try’ video routine was beyond first-class and the familiar but now even more daring, gravity defying harness routine used to present the show’s finale of ‘So What’. Watching P!nk soar and dive across the length, width and height of the arena was truly phenomenal.

Even when the dramatic performance techniques were not employed, the show still had class and panache. The medley of early hits ‘Most Girls’, ‘There You Go’ and ‘You Make Sick’ was a humorous trip down memory lane – the accompanying outfit was suitable tongue-in-cheek, whilst rousing sing-at-the-top-of-your-lungs tracks such as ‘Trouble’, ‘How Come You’re Not Here’ and ‘Are We All We Are’ needed nothing other than the playfully rebellious, infectious and rousing bravado within to enhance them.

There were several tender and touching moments onstage too, P!nk is an artist that wears her heart on her sleeve and it shows during slower tracks such as ‘The Great Escape’, which was performed solo by the lady herself at the piano. The acoustic section as always was mesmerisingly brilliant, the cover of James Taylor’s ‘Fire And Rain’ was captivating. At one point, P!nk noticed a drawing that an audience member had done of her, she showed it to the arena which garnered a huge cheered and then signed it for it’s creator – it’s those types of fan and artist moments that truly count! The closing credits at the end of the show were delightful, and featured a video montage of tour rehearsal and personal behind the scenes footage.

The set-list matched and complemented the theme of the show – covering the full range of love within its many forms. There was a nice balance between new material, hits and cover versions – the succession of gigantic hits early on was a master stroke and everyone was catered for across the 110 minutes. The video projections were mighty and effective at aiding the visual presentations of the songs themselves and throughout, the show was presented with bold defiance and unrestrained wonderment and so as a result we left reminded that P!nk is an absolutely stunningly astounding and aspirational woman with immensely enormous talent and heart. Also, finding out during the show that she is left-handed became something of a revelation – we’d not given it any thought before but as P!nk signed autographs during the acoustic ‘campfire’ section, it struck us as odd that we hadn’t realised this before!

Finally, reflecting upon the show afterwards, one thought kept reoccurring… Cher’s “follow this show you bitches” sentiment which she laid down during her 2002 ‘Living Proof: The Farewell Tour’ – P!nk certainly has surpassed even her own self and has now raised and smashed the standard for all arena shows once more. ‘The Truth About Love Tour’ is an enormously incredible, astonishing spectacular!