Hello! Here are some newsy items, of things you a) don’t really need to know or b) probably already know and perhaps c) nice to know afterall. Regardless of whichever option might be most fitting, here’s what we know and think you should know it too…

*Firstly, the divine godess Kylie Minogue has been in the studio with Rodney ‘Darkchild’ Jerkins this week. The news was confirmed by ‘Darchild’ himself who tweeted the following…

Rodney is of course responsible for some of the most amazing monster smash hit having worked with the likes of Destiny’s Child, Spice Girls and Michael Jackson as well as being responsible for THE mother of ALL duets between Brandy and Monica. This new management deal with Roc Nation is certainly paving the way for high class collaborations, as Kylie also recently worked with Swedish powerhouse production team Stargate.

Kylie has just launched a new limited edition range of mini dolls. The six figurines are based upon iconic images, video outfits and tour costumes that Kylie had presented during the past twenty five years. The six dolls are thus called ‘So Lucky’, ‘Spinning Around’, ‘Showgirl’, ‘Aphrodite’, ‘La La La’ and ‘Homecoming’. 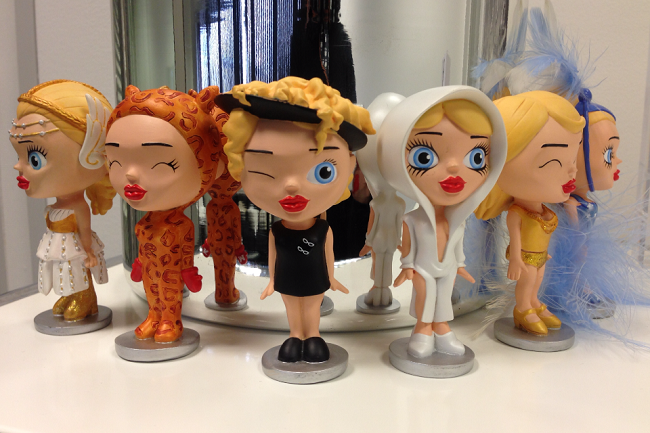 The three-inch dolls are limited to 500 of each doll, priced at £18 per doll and are available from Kylie official store here.

*The beyond AMAZING and incredible, Kelly Clarkson has confirmed that she is releasing a Christmas album! During a question and answer Kelly spoke of the seasonal offering as well as giving some details with regards to her sixth studio album. You can watch the entire question session here.

*Kelly Rowland has confirmed the release date for her forthcoming fourth studio album ‘Talk A Good Game’ as 3rd June! Kelly has also spoken of a track from the album entitled ‘You’ve Changed’ which features Beyonce and Michelle. See her speak about the collaboration here.

*The incomparable Janelle Monáe has confirmed details of her second studio album. The collection entitled ‘The Electric Lady’ is preceeded by the first single ‘Q.U.E.E.N’ which features the stunningly sublime Erykah Badu. The track will debut on Janelle’s official site on March 22nd.

*The supremely brilliant, Diana Vickers is BACK! Diana has a new single entitled ‘Cinderella’, you can hear a snippet below.

The single was co-written with Miranda Cooper of Xenomania. The track will be released on 21st July and is taken from her forthcoming second studio album entitled ‘Music To Make Boys Cry’ which is expected to be released in the autumn – AMAZING!

*The Charli XCX album ‘True Romance’ is available from tomorrow but can be streamed in full exclusively ahead of its release at Pitchfork – listen here.

*CSS return with their third studio album entitled ‘Planta’ on 10th June. The eleven track album was produced in the main by David Sitek of TV On The Radio and features the forthcoming single ‘Hangover’, which you can listen to below.

*Finally, Frank Ocean has unveiled the latest video for his current single ‘Lost’. The track itself is a runaway highlight from his debut record ‘channel ORANGE’. Absoulte sheer brilliance…