Last night we had a trip to see the beyond amazing Leona Lewis as she played her second night on her current ‘Glassheart Tour’ at the legendary Royal Albert Hall. 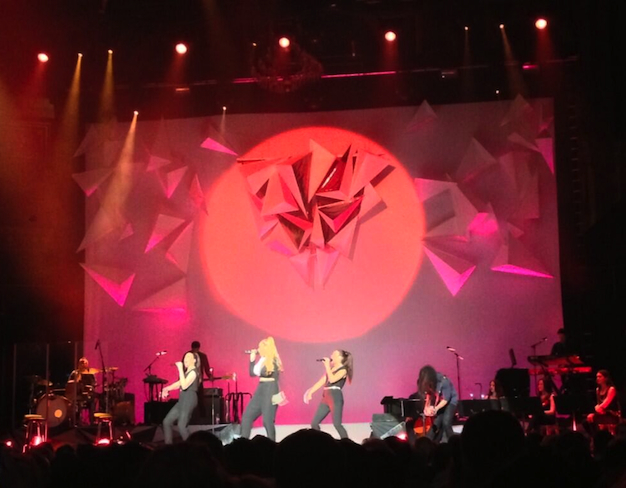 The impressive venue seemed fitting for such a talent, it is an intimate space that enables the performer to connect with the audience and Leona was certainly able to do that last night, showing that she is a seasoned, confident and commanding performer in the process. Appearing in a red ensemble with hair that was slicked back in a high pony tail, Leona opened with an initially stripped back performance of ‘Come Alive’, where you could hear a pin drop as the five thousand plus audience hung on every word and note that she sang before the quiet gave way to a rousing and lively climax. This was followed with a stunning performance of the uplifting ballad ‘Fireflies’, which again she smashed with her phenomenal vocal ability. Leona introduced the third track with a recollection of her journey since X-Factor, giving an acoustic led performance of ‘A Moment Like This’ which came complete, with those high register whistles notes that were greeted with triumphant cheers of delight from the diverse crowd.

Largely, the first half of the show contained the well known uptempo hits such as ‘Collide’ and ‘Forgive Me’ which featured a dance routine alongside her two backing vocalists. The reggae version of ‘Better In Time’ coupled with elements of Rihanna’s ‘Man Down’ featured some inspired grooving and most surprisingly a ‘slut-drop’, which produced an audible gasp from someone behind which made us chuckle! An urgent and clattering performance of ‘Sugar’ which appears as a ‘Glassheart’ deluxe edition track was lost on most of the audience but enabled Leona to unleash her inner dance diva – the strings section onstage lifted the crescendo. The uptempo tracks allowed Leona to let loose and to showcase the playful, fun loving side to her personality, which is not always possible when performing the serious heartfelt ballads, she is perhaps more well known for.

The main focus of the show seemed to be about stripping back the layers, studio production and gloss to reveal the fragile, root or inner core of the songs and so, within the live arrangements the tracks would be performed in an acoustic style, accompanied by a simple piano or a guitar – this meant that Leona’s extraordinary vocal range was prominently the focus, no hiding behind the full throttle sound of the band. After all Leona is all about the intense magic she conjures when she is able to use that sublime and astonishing voice to full effect.

The second half of the show featured more ballads with Leona performing a defiant and strong version of ‘Happy’ alongside an arresting interpretation of ‘Trouble’ which saw Leona playing the piano. She gave a heartstopping rendition of the dramatic power ballad ‘Broken’ and the emotionally touching ‘Footprints In The Sand’ which was dedicated to her Grandma. Elsewhere, in this section a sole piano rendition cover of ‘Locked Out Of Heaven’ by Bruno Mars assisted very ably by David Tench on the keys was given a rapturous, overwhelming response, as was her cover of ‘First Time Ever I Saw Your Face’ – seemingly, the over 50’s in the room cheered most wildly as Leona’s vocal soared through the performance effortlessly.

The encore is where it felt like things were revved up to a frenzy with an incredible version of ‘Glassheart’ with Leona wearing a cape, whilst performing on the drums, the dazzling and blinding lights adding to the euphoria – it was cute to see the older generations dancing along. The final track ‘Run’ featured an appearance from the Hackney Empire Community Choir, it felt like a crowning glory, a gold medal winning performance and the electric reaction from the audience can only be compared to the atmosphere we experienced inside the Olympic Stadium last summer – it made the bottom lip wobble in the presence of so much love and gratitude that was bestowed upon Leona for her outstanding and terrific performance.

Production values of the show were high – there was an imaginative use of alternative video screens and projections, the bold, abstract 3D art set pieces which framed the scene onstage and other props were distinct. Leona herself looked comfortable and in command on the stage, she had three striking outfit changes which suited the tone and feel of the set design. Above all, Leona yet again proved and reminded all in attendance that she is a formidable vocalist, through the soft lower registers to her soaring heights of her belting voice – Leona is supreme and entirely worldclass.

There are some that have or might go on to dismiss the Leona’s performance or unfairly compare it to other high-profile shows from fellow female artists such as P!nk or Beyoncé but it is most important to remember that Leona is a different kind of artist who onstage presented her own and entirely unique vision, which ultimately turned out to be a beautiful, glorious and unanimous triumph!