We went to Chime For Change at Twickenham Stadium yesterday. The event was organised to raise both money and awareness for the charity which seeks to uplift and support women across the world who might not have the same opportunities that so many people take for granted.

*The show was opened by Jessie J who was an unexpected addition to the participants.

*The show was officially opened by founding charity member and organiser of the event, actress Salma Hayek. Other actors and actresses appeared throughout the show to talk about the need for change – the likes of James Franco, Jada Pinkett-Smith and Ryan Reyonlds all showed support for the event.

*Iggy Azalea turned up to knock out a couple of numbers as did Rita Ora and Laura Pausini.

*All hail the QUEEN – Madonna arrived onstage in-between musical performances to share her thoughts on the event. In true Madonna fashion she gave an impassioned and heartfelt plea, she reprimanded and demanded the audience listen at one point, but she continued with a generous donation by offering to match funds raised to help build a school – the public to build the first floor, whilst she will pay for the rest to be built! 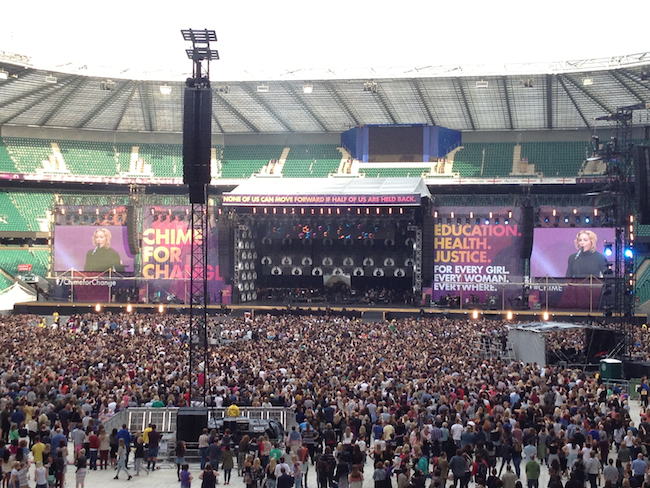 *Florence + The Machine needs a lesson in giving the audience what they want as she delivered a performance of ‘Over The Love‘ which is her contribution to the soundtrack to the film The Great Gatsby, whilst it’s a great song, it was lost on much of the audience who really would’ve preferred to hear the hits but when did did get her hits out, the reaction was electric! Take note Florence!

*Jennifer ‘JLo’ Lopez proved she is a great giving them what they want. She delivered a high octane set which featured plenty of over the top dancing and theatrics. She did a hits medley too which was completely brilliant and was joined on-stage by Mary J. Blige as the pair duetted on the Beatles classic ‘Come Together’.

*Haim did a good job on the extended drum outro of their final number. Whilst, John Legend was met with an enormously affectionate welcome. Ellie Goulding was there! As was Timbaland who gave the most bizarre and completely pointless performance of the night – sorry Tim!

*Jay-Z joined her onstage for ‘Crazy In Love’, Jay-Z looked like he’s lost weight and he gave her a kiss as he left the stage, Beyoncé tried hard to stifle a beaming smile as he did but naturally failed -CUTE!

*She performed ‘Grown Women’, which received its first live performance in the UK.

That’s about all you need to know really folks!