Hi! Yes – marking is complete! Thanks for the patience, shame the world of pop never breaks for a breather… we have so much we want to tell you, most of which is probably old news to most of you but nevermind! Let’s start today with a round-up and see how we go from there…

*The legendary and quite frankly beyond amazingly brilliant Gabrielle has hinted that her forthcoming sixth studio album is set for release in September! 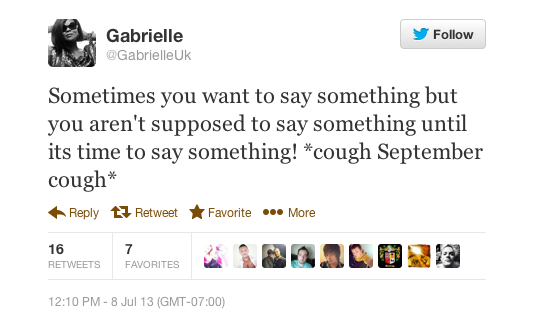 *The new Diane Birch album ‘Speak A Little Louder’ is now complete and has been mastered and everything! Diane posted a picture of the tracklisting on her Instagram page which you can see here. The album is finally set for release in October!!!

*The legendary and stunning Gloria Estefan will play a one-off show at the Royal Albert Hall on 17th October in support of her forthcoming album ‘The Standards’. The show is billed as a unique chance to see Gloria, backed by full orchestra perform tracks from the great American songbook as well as re-work her most well known hits with new musical arrangements to match the style of the standards. It will certainly be an unexpected, exciting evening of live music in the presence of one of the world’s greatest singers. Ticket go on general sale here.

Earlier this year Gloria performed tracks from the album live which is set broadcast in the US during August, here is a taster of what to expect in London come October… pure class!

*To coincide with the release of her forthcoming single ‘Big When I Was Little‘ the incredible Eliza Doolittle will play a special one off show at the gorgeous Islington Assembly Hall. Tickets priced £15 are now on sale, here. Eliza will also join The Script for the annual Blackpool Illuminations lights switch on which takes place on 30th August.

*Fresh from their recent number 1 smash hit single, Icona Pop will play their second headline show in London following their sold-out venture in March. The duo will play XOYO on 9th October. Tickets are on sale here.

*Travis return with their sixth studio album ‘Where You Stand’ on 19th August. The band will then play a series of UK shows with tickets on sale from 9am on Friday 12th July. They will be calling at the following venues, on the following dates…

*Justin Timberlake has unveiled the saucy video for forthcoming single ‘Tunnel Vision’. The Jonathan Craven, Simon McLoughlin and Jeff Nicholas directed clip seductively captures a series of naked women whose modesty is subtly protected. The Timbaland produced track serves as the third release from part one of ‘The 20/20 Experience‘. We’re off to Wireless Festival this week where Justin is headlining so we’ll keep you updated about his set.

*One of our absolute favourite human beings, EVER, EVER the delightfully amazing P!nk has debuted the video for her forthcoming triumph ‘True Love’. The track features a brief appearance from Lily Rose Cooper (Lily Allen to you and me) and is the fourth release to be lifted P!nk’s outstandingly excellent ‘The Truth About Love‘ album. The video still shows a playful yet softer human side to P!nk’s personality with footage of husband Carey Hart and daughter Willow Sage as the family are on tour as P!nk wows and amazes audiences with her live shows.

*Ellie Goulding will re-release her latest album ‘Halycon’ on 26th August. The repackaged edition will be known as ‘Halcyon Days’ and will feature ten additional tracks, nine of which are brand new to this latest version. The lead single from the collection ‘Burn’, (which was previously demoed by Leona Lewis for inclusion on her magnificent album ‘Glassheart’) is a gorgeously care-free, spirited summer number that suits Ellie’s ethereal, breathy vocal stylings perfectly.

*Despite the fact the single was released in Sweden in 2011 and then across Europe in 2012, yet only LAST week did Loreen premiere the video for the hit ‘My Heart Is Refusing Me’, which is taken from her debut album ‘Heal‘. The single itself is a blinding piece of melodramatic, heartbreaking dance pop that will ensure plenty of tears whilst on the dancefloor. The video is a dark, intensely moody and atmospheric affair which adds to the drama of it all… supreme!

*John Mayer kicked off his latest world tour to support his latest album ‘Born And Raised‘ this week, yet despite this John will soon (19th August) release an entirely new record entitled ‘Paradise Valley’. The first single from the collection is the sublime ‘Paper Doll’ which is an effortlessly soothing tale with vocals that are swoon-some and which continues the laid back sun soaked, high summer sound that has coloured his recent work. Utterly glorious…

*MutyaKeishaSiobhan (MKS) have finally unveiled their first release in the shape of Dev Hynes produced ‘Flatline’. The gorgeously sumptious sounds of the distinctive wobbly guitar introduction, the vintage throwback production, combined with the heartbreaking lyrical narrative and tight, lush harmonies makes for one of the most exciting releases of the year – it sounds unique and unlike anything else within the pop sphere right now. Each member sounds dazzling in their own right too – the soulful tones of Mutya, the belting vocal runs from Keisha and the delicate yet grand delivery from Siobhan are united to create an undeniable magic that is captured on this track – it is electrifying and repeated listens are inescapable nay demanded and compulsory. It also features the finest use of the word ‘miscellaneous’. An absolutely stonking, big giant amazing song that has heart, individuality and is full of truth and beauty. Flatline is released on 1st September.

*Autoheart released their latest double A-side single ‘Moscow / Agoraphobia’ this week, ahead of their debut album ‘Punch’ which is available from 15th July and is currently streaming in full over at MusicOMH.

*Following two singles earlier this year, Annie is back with a new EP titled ‘The A&R EP’ and features five tracks that were produced alongside Richard X (Rachel Stevens, Liberty X, Kelis). The first taster is the ridiculously wonderful ‘Back Together’ which you can listen to here. The EP is available from 5th August.

*And finally, the fifth studio offering from Ciara is released this week. The self-titled record is a luxurious melting pop of laid back grooves, slow jams and uptempo bangers. DazedDigital is currently streaming the album in its entirety here should you want to listen to it.