Last week, we had the enormously unique privilege of attending a (then) preview screening of ‘About Time’, which is billed as the directorial swansong of the renowned and hugely successful Richard Curtis (‘Love Actually’, ‘Notting Hill’, ‘Four Weddings And A Funeral’). 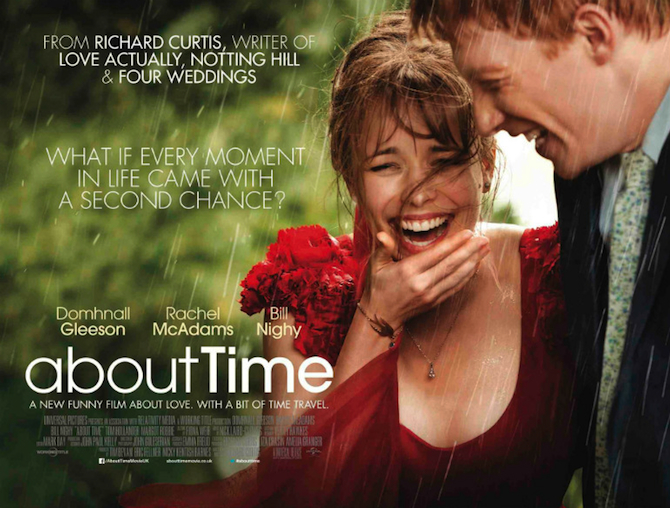 Taking place last Tuesday night at the Electric Cinema in Notting Hill, it was billed as a male only screening, an opportunity to attend with male family members and other than that we hadn’t anticipated the evening which was to come. Upon arrival, Richard Curtis was greeting those invited, and upon progressing through to the screen itself an array of famous men (and Sienna Miller, swamped under an enormous hat) including Jimmy Carr, Jason Donovan, Gary Barlow, Chris Moyles, Reggie Yates, Rowan Atkinson, Jon Snow, Krishnan Guru-Murphy, Harry Enfield, Jamie Oliver, Steve Jones, Rufus Hound, Marcus Brigstocke, David Badiel, Patrick Kielty, Ben Miller and Bob Geldof were all in attendance – it was absolutely, extremely surreal being shoulder to shoulder, amongst a sea of so many incredibly well known faces. There were some gorgeous nibbles and the wine flowed.

A seat at the Electric is unlike any other cinema experience, the ninety seat capacity theatre is home to individual leather arm chairs, cushions each with a pouffe foot stool and side table, which makes for the most comfortable cinema experience, ever.

The film itself is wondrously delightful – a film bursting with charm, humour yet tinged with sadness. Principally, there is a time travel element in which the main protagonist Tim (Domhnall Gleeson) discovers he can revisit past events. He initially uses this power to find love and eventually he does. It was at this point we were expecting the typical boy loses girl and spends the rest of the film trying to win her back type of plot line. Thankfully and supremely refreshingly, this did not occur. The remainder of the film, instead dealt with the family relationships, particularly the bond shared with his sister and their father. The film is elegant, tender, touching, honest and packs a powerful emotional punch. The script makes important points about the value of living in the present and of the relationships we share with those closest to us. And so, we cannot enthuse or recommend ‘About Time’ enough – it is a heartwarming, unexpected tale, that is full of laugh out loud moments above all holds a wonderful, sincere, spirited sentiment. (As an aside, being in a cinema screen which holds audience member Jimmy Carr and his uniquely distinct laugh is one of the strangest yet finest things we’re likely to encounter for some time).

It is here, we reach our desired and original point for writing about the occasion. As with all films from Richard Curtis, music is a pivotal, driving force for the story which shapes the narrative and mirrors the action, thoughts and feelings of the characters. Below is a series of videos, in which Richard discusses with great passion about the music chosen for and featured within ‘About Time’.

During the film, a cover version of a song originally by The Waterboys (‘Whole Of The Moon’) titled ‘How Long Will I Love You’ performed by Jon Boden, Sam Sweeney & Ben Coleman is the backdrop to Tim’s relationship with Mary (Rachel McAdams) – the trio of buskers play the song at a London Underground station in a scene which centres upon the lovers as their relationship develops. The song is again featured during the closing credits but performed by Ellie Goulding, who has today unveiled the music video for the song.

The gorgeously, captivating fragile piano led ballad suits Ellie’s vocal beautifully as she captures the emotion, heart and simplicity of the lyric, “how long will I be with you, as long as the sea is bound to wash upon the sand”. The video features customary shots of action from the film and these are suitably stirring, swelling and handsome.

‘How Long Will I Love You’ is featured on the ‘About Time’ film soundtrack and is taken from Ellie’s recent release ‘Halcyon Days‘.