UK meet and prepare to fall in love with Capital Cities who are your new favourite band! The LA based electro pop duo who comprise of members Ryan Merchant and Sebu Simonian initially emerged in 2010 with a single titled ‘Beginnings’ before releasing a self-titled five track EP a year later. 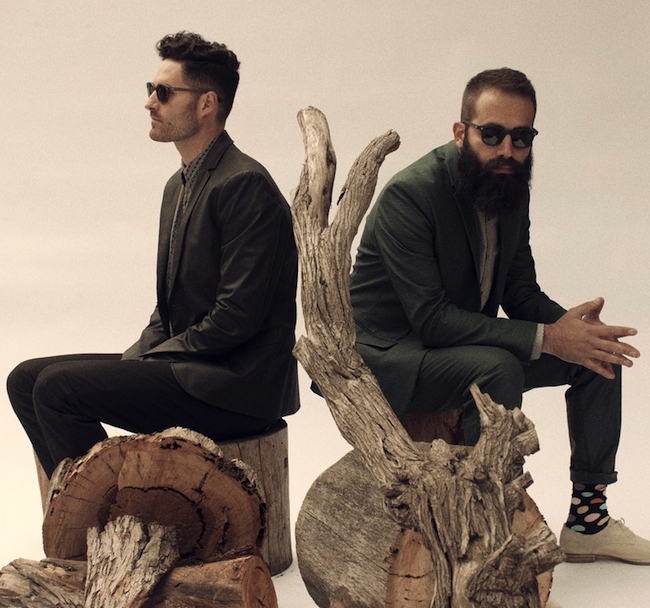 The duo’s lead single ‘Safe And Sound’ is released today here in the UK today and has previously topped the chart in Germany and peaked at number 8 on the US Billboard Hot 100 whilst the video recently won an MTV VMA for Best Visual Effects. The track is an infectious, breezy synth laden track that has an addictive chorus underpinned with the rousing use of a trumpet which gives an immediate and gorgeously instant quality. The lyric “in a tidal wave of mystery” also provides the title of their forthcoming debut album.

‘In A Tidal Wave Of Mystery’ finally arrives on these shores on 30th September. It is an album that is a thrilling feel-good soundtrack which provides a rollercoaster rider of subject matter, sounds, concepts and ideas – it is an extremely impressive debut collection and one which manages to surprise and delight at every turn. The thoughtful, often wistful yet fun and knowing lyrical content matched with bold, expansive and warm, sun-soaked moments creates an extraordinary, unexpected and unpredictable listen.

Aside from the single, other highlights include ‘Patience Gets Us Nowhere Fast’, which offers a driving rhythm and off kilter strings combined with a lyric for the hopeless romantic “I want it all and nothing less. I want it all, I want the best for you, I’m telling you the truth. You are the kiss I don’t expect…” The duo’s second international single ‘Kangaroo Court’ provides a relentless, tumbling back drop of synthesised sounds imbibed with glorious horn-infused extended breaks. Structurally and lyrically it is very clever with short, simple bursts making it instantly sing-a-longable. The track is available as a free download from the bands SoundCloud page here, whilst a video features appearances from Glee stars Darren Criss and Shannon Woodward.

Elsewhere, tracks such as ‘I Sold My Bed, Not My Stereo’ and ‘Farrah Fawcett Hair’ provide truly stellar moments. Cleverly, both evoke an effortless, timeless quality despite the subject matter and lyrical content being age and time specific. ‘I Sold My Bed, Not My Stereo’ features a bouncy, care-free melody that is fleshed out with blasts of trumpet and stuttering beats. The lyric serves as a reminiscent memory “blank tapes and posters on the door. Listen to my Pink Floyd cover, take a seat like a backbeat lover, mixed tapes and cushions on the floor.” Similarly, ‘Farrah Fawcett Hair’ is a nostalgia infused track which references the likes of Back To The Future, Daniel Day Lewis and Nutella and features spoken verses provided by Frank Tavares (NPR) alongside Andre 3000 who delivers a fitting verse, whilst an enormous female vocal  from Shemika Secrest belts “Like Michael Jackson’s ‘Thriller’, like Farrah Fawcett hair, it’s good shit, it’s good shit, yeah!” It’s wholly riveting, exciting and boundlessly uplifting.

There is plenty to intrigue, entertain and enjoy. The reverent delivery of ‘Love Away’ provides a chirpy yet refined heartfelt moment, whilst ‘Lazy Lies’ features a simple, elegantly hazy backdrop infused with the use of suppressed organ and woodwind instruments against an overlapping, layered vocal wall of sound and incidentally creates a welcome contrast to the bombast. ‘Chasing You’ creates the sound of dreamy ethereal pop complete with 80’s inspired sounds and embellishments. ‘Origami’ offers an irresistible vintage funk through the use of forceful rhythm guitar and piercing trumpets and a lyric that speaks of love in its initial flourishes “I stole your diamonds and gold, what are you going to do about it”.

‘In A Tidal Wave Of Mystery’ is an engaging, brightly coloured, creative melting pot which makes for a sublime, spritely, effervescent debut, one which is full of gloriously divine melodies and luxuriously additive hooks. Undeniably brilliant and essential!

*Should you require further musical evidence, an array of free downloads including cover versions (‘Holiday’, ‘Nothing Compares 2 U’) and remixes are available here.