*Following her contribution to ‘The Great Gatsby’ film soundtrack with ‘Kill And Run‘, the incredible Sia once more lends her tremendous vocal capabilities to another silver screen outing as she appears on the soundtrack that accompanies the forthcoming ‘Hunger Games: Catching Fire’ picture. The soundtrack for which also features new material from artists such as Lorde, Ellie Goulding and Coldplay who have provided the main theme to the movie. 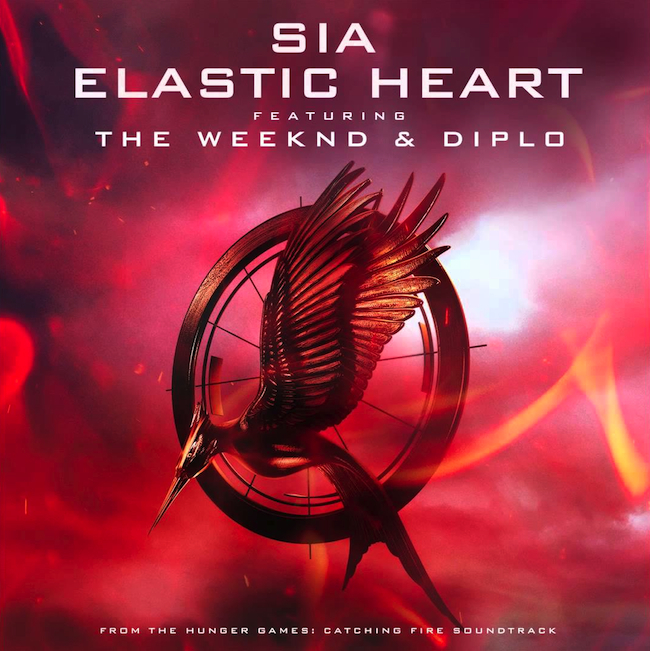 Anyway, Sia’s ‘Elastic Heart’ features The Weeknd and Diplo and provides a mid-tempo groove that features an array of layered vocals, chants and stuttering drum loops which in turns creates a swirling, tribal sound that is entirely uplifting and affirming. It has an imaginative, honest lyric that only Sia can deliver.

*The ‘Hunger Games: Catching Fire’ soundtrack also features a new track from the extraordinary Christina Aguilera. ‘We Remain’ is a mid-tempo soaring piano led ballad that speaks of keeping faith and sees a refined and deliberately controlled vocal performance which serves to create a beautifully striking but still feisty moment and which is a revelation to hear the finer tools within Christina’s impressive range.

*Julio Bashmore is a DJ and producer who worked on tracks that featured on the debut album from Jessie Ware. Now, he has his own single ‘Peppermint’, which features Jessie’s distinctive, soulful vocal against a barrage of looped dance beats and production flourishes.

*Flume is a DJ and producer from Australia. His debut self-titled album was released earlier this year and features a plethora of richly creative vibes fused with hip-hop elements, alternative production and downbeat vocals to create an intriguing, experimental at odds sound which works surprisingly brilliantly. A deluxe edition of the album is set for release and features a reworked version of the track ‘Holdin’ On’, which now features a guest spot from rapper Freddie Gibbs.

*Lauryn Hill has showcased a new track titled ‘Consumerism’, which is part of a wider project titled ‘Letters From Exile’. ‘Consumerism’ continues the stop-start delivery that was first showcased during her 2002 MTV Unplugged session. The cryptic, apocalyptic messages serve to highlight the inadequacies facing modern society.

In a message posted on her Tumblr page, Lauryn writes, “‘Letters From Exile’ is material written from a certain space, in a certain place. I felt the need to discuss the underlying socio-political, cultural paradigm as I saw it. I haven’t been able to watch the news too much recently, so I’m not hip on everything going on. But inspiration of this sort is a kind of news in and of itself, and often times contains an urgency that precedes what happens. I couldn’t imagine it not being relevant. Messages like these I imagine find their audience, or their audience finds them, like water seeking it’s level.”

*Azure Blue is the name of Tobias Isaksson’s solo project. He presents ‘Beyond The Dreams There’s Infinite Doubt’ as his own second solo record and it’s a largely beautiful affair which marries eighties synths matched with dreamy electropop structures that create a warmly melancholic outlook – it’s somewhat subdued with downbeat tendencies yet the album has a good heart that is well intentioned, hugely likeable and achingly beautiful.

*JLS! ‘Billion Lights’ is the swan song from the quartet who announced their impending split earlier this year. The single is the sole new track that appears on their forthcoming best of collection ‘Goodbye – The Greatest Hits’, which hits stores on 12th November. ‘Billion Lights’ is a club ready electro inspired track that features all of the trademark JLS ingredients from impressive vocal performances, catchy hooks and a killer chorus. It is the video that is most exciting – it charts the history and touchingly plots the memorable moments from their chart reign.

*There is now a video to accompany the magnificent new single from Lulu James. ‘Sweetest Thing‘ is a touching lyrical sentiment against a soft electro reggae-lite back drop and the minimal video reflects the simplicity within the song itself. The single is released on 3rd November.

*Katie Melua has unveiled a video for ‘The Love I’m Frightened Of’, which serves as the second single from her recently released sixth studio album ‘Ketevan’. The single is a beautifully fragile composition penned by Luke Batt, son of Mike Batt, whilst the video captures the trials of a relationship with refreshing honesty and cinematic depth.