For many over the years, Christmas inspired music has been fundamental in evoking that festive anticipation, spirit and excitement. During the past few years, there has been a resurgance of newly penned seasonal music to rival the timeless classics and looking back, Christmas 2012 was a bumper, vintage year with a host of top pop acts such as Eliza Doolittle, Colbie Caillat, Cee-Lo Green, Alphabeat, Dragonette, Dawn Richard, Tracey Thorn, Backstreet Boys, Lady Antebellum, Blake Shelton and Christina Perri amongst others all releasing some mighty fine festive offerings. 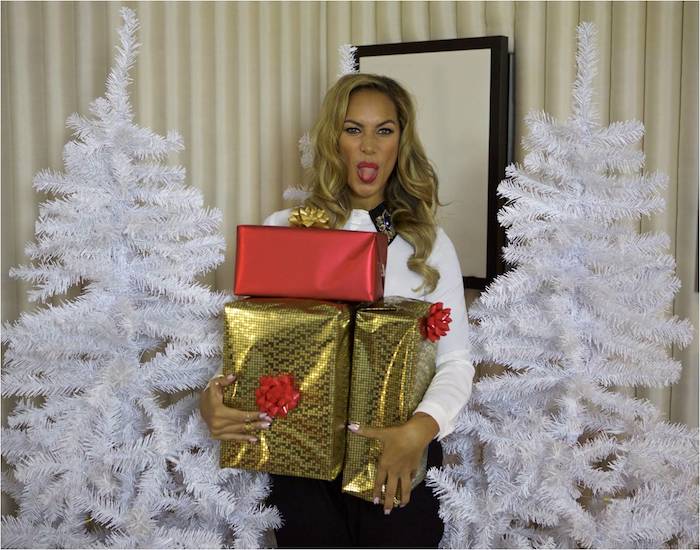 How will 2013 fair when we look back and reflect come this time next year? Will any of the music featured here below join those celebrated timeless favourites of years gone by? Here is a rundown of the absolute best of what is on offer to you this holiday season…

*Following the stunning winter themed EP ‘Yes, December’ in 2011, Nerina Pallot releases her first Christmas EP proper today with ‘We Made It Through Another Year’. Conisiting of five original tracks, the set ranges from jazzy, lounge vibes to riotous girl-group punk whilst lyrically the songs traverse the sweetly endearing (‘A Christmas Lullaby’) to those that touch on the darker, at odds feelings that are felt during what is the supposed to be a joyous and celebratory holiday (‘I Know What You’re Doing For Christmas’). As ever, Nerina has created a truly unique and magnificent EP that is astonishingly gorgeous and achingly beautiful. Complete perfection.

*Both Sheryl Crow and Blake Shelton have previously released individual Christmas albums but this year they have joined forces to duet on the traditional carol ‘Silent Night’, whilst they were at it, they added a country slant on proceedings – how nice…

*US soul and RnB singer Dondria is giving away a free Christmas inspired number titled ‘Ain’t No Way’ which is available through her SoundCloud page. The track is an effortlessly luxurious sounding track with a top-draw, killer vocal display on a song that lyrically speaks of both desire and hope.

*Upcoming singer songwriter Fyfe has recorded a version of ‘We Three Kings’ which can be downloaded for zero pence in exchange for a Facebook ‘Like’ which is a fair swap. His version offers a simple yet, haunting and chilling sound that on the whole is a rather beautiful encounter.

*CeCe is a talented, rounded musician, a singer-songwriter that already has an impressive cannon of work – her debut EP ‘Framework‘ is quite something. ‘This Winter’ is a quietly simple, bleak sounding piano led number that sonically captures and mirrors a cold, longing landscape with lyrics that speak of pain and loss. Remarkably enchanting and captivating.

*For the past four weeks pop newcomer Ariana Grande has been releasing a series of Christmas tracks with a mix of original and classic material. ‘Snow In California’ is a smooth RnB tinged ballad with dazzling multilayered vocal runs.

*As we previously mentioned ‘Best Man Holiday‘ the sequel to the 1999 film ‘The Best Man’ was released in cinemas in November. Its soundtrack features a host of soulful interpretations of Christmas numbers from stars such as Emeli Sandé, Monica, Jordin Sparks as well as some newly written tracks from the likes of John Legend, R. Kelly and Ne-Yo.

*Kelly Clarkson’s Christmas album ‘Wrapped In Red’ is supreme. It features five newly penned Yuletide inspired tracks alongside interpretations of classic tracks such as ‘White Christmas’ and ‘Silent Night’. The mighty lead single ‘Underneath The Tree‘ now has an official video, which is predominantly footage taken from Kelly’s TV special ‘Kelly Clarkson’s Cautionary Christmas Music Tale’ which aired in the US last week interspersed with backstage footage.

Below is footage from the TV special with Kelly giving a heavenly live performance of ‘Silent Night’.

*The Killers continue their annual collaboration with the charity (RED) by releasing a new Christmas track which is to raise money in the global fight against AIDS. Their eighth holiday single for the organisation is titled ‘Christmas In L.A’ and features Dawes. The track is a sad lament filled with regret and tinged with despair and one which embodies the reflective nature of the season. It is yet another exceptional release.

*Somewhat disappointingly, Mary J. Blige’s first festive album, ‘A Mary Christmas’ doesn’t feature any new material but how she makes up for it as she sings the hell out of the songs featured on the album. The record also boasts some impressive collaborators such as Barbra Streisand, Jessie J and The Clark Sisters. As well as the video for ‘Have Yourself A Merry Little Christmas‘, Mary has created a visual clip for her rendition of ‘My Favourite Things’.

*American singer-songwriter Andra Day is celebrating the holidays with a free EP titled ‘Merry Christmas’ which consists of four traditional reworkings that showcase her uniquely expressive, soulful, jazz infused vocal to the highest. The EP can be downloaded here by signing up to her mailing list.

*Following on from her 1999 release ‘Joy – A Holiday Collection’ Jewel has released her second Christmas album titled ‘Let It Snow – A Holiday Collection’. The deluxe edition boasts sixteen tracks which cover a range of traditional carols alongside three original numbers. During an appearance on The Queen Latifah Show, Jewel duetted with the host on the album title track…

*Toni Braxton & Babyface have teamed up for a version of the standard ‘Have Yourself A Merry Little Christmas’. The combination of their voices together is sublime and offers a refreshing twist on a song that has been recorded at least a billion times before.

*Tamar Braxton has released a festive album titled ‘Winter Loversland’. The album is a ten track collection of festive favourites alongside two newly written tracks with the dramatic, heartfelt vintage ballad ‘She Can Have You’ serving as the lead track. If you can, hunt down the Target (US retailer) edition which features two bonus tracks, both of which are original numbers.

*Ashanti is no stranger to holiday releases as she put out the album ‘Ashanti’s Christmas’ in 2002. Here, in 2013 she has released a five track EP of festive tracks that appear in the Lifetime TV movie ‘Christmas In The City’, the cast of which includes Ashanti herself in the role of Teanna.

*Following last years impromptu tube performance which was captured by fellow travellers and became a viral YouTube sensation, Kim Wilde has recorded a Christmas themed album titled ‘Wilde Winter Songbook‘ which consists of six original tracks, four Christmas classics and two covers. The record celebrates the joyous moments of the season and includes music created alongside her large musical family whether it be songs written or performed with brothers, sisters or her own children. The album also features duets with artists such as Rick Astley and Nik Kershaw.

*Jordin Sparks has recorded a special Christmas inspired track that serves as the theme to the seasonal Glade campaign. Backed by The Young People’s Chorus of New York City, ‘This Is My Wish’ is a syrupy sweet, sentimental ballad that is touching and endearing. The track is available to download for free via Glade’s site here until 31st December.

*The stars of the Big Reunion have released a special version of ‘I Wish It Could Be Christmas Everyday’ in aid of Text Santa with proceeds going to the ITV fundraiser which is to take place on Friday 20th December. The Big Reunion rendition of the Wizzard classic features a newly written rap from Abz.

*Erasure have released an album titled ‘Snow Globe’. The album is rooted in exploring loss and the darker, sad times that many experience during this time of year, combined with versions of traditional carols and hymns.

*Last week, Kate Nash released a five track EP titled ‘Have Faith With Kate Nash This Christmas’. The collection is led by the song ‘I Hate You This Christmas’, which lyrically speaks of deception and heartbreak and is surely the only festive track to feature lyrics involving “shit” and “puke”, the striking, rather brilliant and realistic video for which premiered today.

*Following Leona Lewis’ performance on The X Factor last weekend her magnificent and superbly festive single ‘One More Sleep’, propelled up the charts and rightly so too because it’s a wondrous affair. The video for which is camply over the top, spirited, retro and most importantly lots of fun.

The track is taken from the album ‘Christmas, With Love‘ which is also doing well on the album chart and would make the greatest Christmas soundtrack – it is the perfect length at ten tracks and Leona sounds utterly incredible whilst Ash Howes and Richard ‘Biff’ Stannard have worked wonders on production. The record features three original compositions including the soaring ballad ‘Your Hallejuah’ and the upbeat sixties girlband inspired ‘Mr Right’ alongside joyously brilliant renditions of festive classics. You can listen to the album in full via the SoundCloud player below… listen out especially for Leona’s interpeation of ‘Ave Maria’ which is spellbinding.